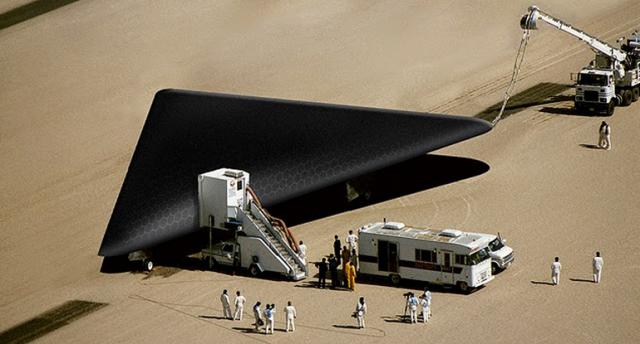 In 1993, during a lecture at the UCLA Alumini Center, Ben Rich, former CEO of Lockheed Martin held a very interesting speech about technological advancements in space engineering in a period of forty years.

He concluded his speech with the following quote: We now have the technology to take ET home.” – Ben Rich, CEO of Lockheed Skunk Works, 1993 While talking about ET the last image of the slide showed a mysterious black disk-shaped object flying into outer space. What was Mr Rich telling us with the quote? With the image?

Lockheed has designed and built a series of incredible aircraft including the SR-71 Blackbird, the F-22 Raptor and the F-117 Nighthawk, all of them with state of the art technology that no one else had in their possession. Their aircrafts were unique, fast, and lethal.

Vehicles that have been kept far away from the prying eyes of the public. As of 2000, if not a bit earlier, people started to think differently, interest in alien life and extraterrestrial technology, governments could keep up with the high interest of the public in those subjects which has probably led to the numerous declassified UFO files made available to the public in recent years.

In an interview with BBC British system administrator Gary McKinnon, the person who hacked his way into 97 U.S. military and NASA computers, said that he had been motivated by the Disclosure Project since “there are some very credible, relied-upon people, all saying yes, there is UFO technology, there’s anti-gravity, there’s free energy, and it’s extraterrestrial in origin and they’ve captured spacecraft and reverse engineered them.” According to McKinnon, he uncovered numerous files, among them a spreadsheet containing names and details about extraterrestrial officers and fleet logs.

McKinnon searched for the ‘extraterrestrial officers’ in the database of the U.S Military and Navy and concluded that those officers were nowhere to be found. He concluded that these mysterious ‘officers’ had to be Space Marines. McKinnon saw countless UFO images stored in NASA’s computers at the Johnson Space Center’s Building 8 among other highly classified documents. McKinnon was caught in 2002 facing over 50 years in prison and millions of dollars in fines.

Luckily, McKinnon who fled to the U.K. was never extradited to the US and managed to avoid prison. McKinnon firmly believes that extraterrestrial vehicles have been captured by governments around the world, and he also believes that mankind was able to reverse engineer that technology creating highly advanced spacecraft which are today fully functional.

According to Jack A. Shulman, president of American Computer; the invention of the transistor may have been inspired by the study of the remains of a crashed alien spacecraft, basically reverse engineered technology.

Alien Technology and humans reverse engineering it was first mentioned in 1997 when, American Computer Company (ACC) suggested the possibility that the study of the remains of a crashed alien spaceship in Roswell in 1947, or another crashed Alien spaceship might have been definitive for the development of the transistor, made in 1948 by Shockley, Bardeen and Brattain doctors in the Research Center of Electronic Circuits at Bell Laboratories.

The basis for such claims are a series of documents and testimonies that supposedly were in possession of ACC. This theory matches the stories of many others, among them, former Lieutenant Colonel Phillip Corso, who in his book; The Day After Roswell, claims being part of the team that handed the remains of the crashed object and delivered parts to different departments of Bell Laboratories.