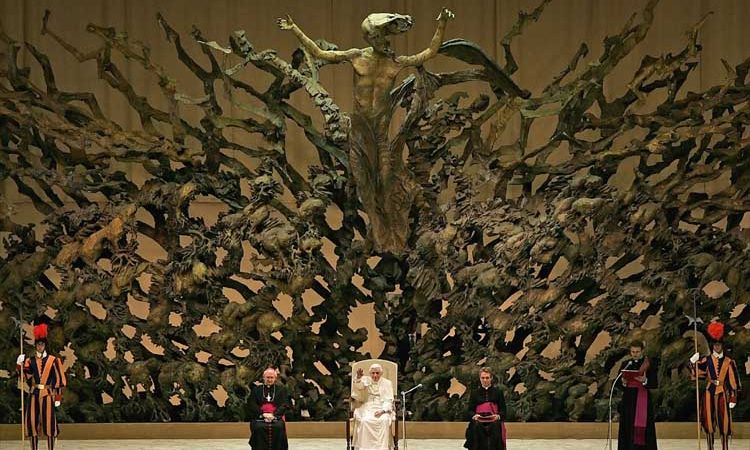 Has the restoration of the Statue of the Resurrection become Satan’s throne?

The statue is supposedly representing Jesus rising from a nuclear bomb crater. Jesus prayed the last time in the Olive Grove of “Gethsemane”. The name of the original creator is Mr. Fazinni. He said and thought that the contrast between showing the Christ rising from a crater made by a nuclear bomb and the fact that this happens in Jesus praying place would make that piece of work an unforgettable view.

The statue is made of red bronze and yellow brass. It is 66 feet tall, 23 feet wide by 10 feet deep.

WHERE CAN THE STATUE BE SEEN?

Well, the statue can be seen, sometimes, behind the pope during his speeches and ceremony in Vatican. It has been in Vatican since Octobre 1977 and still resides there.

WHY ARE WE TALKING ABOUT IT NOW?

The Vatican asks for Mr. Fazinni to restore the original piece of work.

Mr. Fazzini, the creator of this statue, tried to represent Jesus standing in the crater of the explosion showing that, like a phoenix, he has reborn from ashes.

The statue shows Jesus in an apocalyptic scene. His face is showing a face of serenity while the background of the statue shows proofs of disorder and drama. The figure tried to express a message of hope in our time of imminent war and possible destruction.

The people and the worker that lives and works in the Vatican call it Satan’s throne. Why is that? It is because they never see Jesus in a scene where Destruction might come from men sooner rather than later. The Christ has given everything to men for 2 000 years, and the fear of the reality of a nuclear bomb is what might scare those people. The sight of Jesus being reborn from all that violence is sometimes and unbearable view.