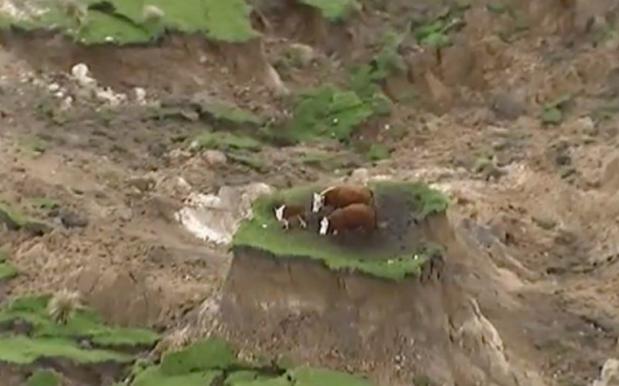 As you know we posted this yesterday, here is the link if you missed it:
7.8 Magnitude Quake in New Zealand Leaves Cows Stranded on Small Island of Grass

Thank you to one of readers named Randa for sharing the update story.

Here is the UPDATE:

The New Zealand earthquake left cows stranded on an island as the land around them crumbled and fell during landslides.

People were shocked by the striking image of the cow family – and called for the animals to be saved.

Footage showed two adult cattle and a calf stuck on a chunk of land in a paddock that had been ripped apart in Monday’s magnitude-7.8 quake.

The patch of grass was surrounded by deep ravines of collapsed earth, trapping the animals where they stood.

After many asked police to rescue the cows, an officer explained to the Sydney Morning Herald that they were not a priority: “The priority of the police is to make sure all human lives are safe and we still need to account for all of them yet”.

Let's hope someone can figure out a rescue for these cows left stranded in New Zealand earthquake https://t.co/mviZ64UBSt

Guys, we gotta go in get these cows! https://t.co/tFgAcSkNXu

A valiant farmer told Newshub about the rescue mission which successfully saved the lives of the bovine family.

“We managed to get a track in and bring them out,” he said.

“They desperately needed water, cows don’t like living without water so that was the first requirement.”

He said a fault line had run along the farm, killing many cows, and that fourteen had been saved in total.

Tragically, he explained why some of the cows were so distressed: “I think one or two had lost calves in the earthquake so they were a bit distressed.”

“It was very steep limestone bluff covered in lovely pasture a week ago, and now it’s all in the gully,” he said.

Kaikoura is close to the epicentre of the overnight earthquake, and where one of the two confirmed deaths occurred. The quake was strongly felt to the south in Christchurch but was far less damaging than a smaller 2011 earthquake that devastated the city and killed 185 people.