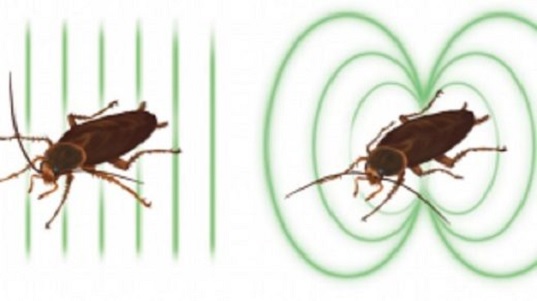 The Curious Case of Cockroach Magnetization

Birds are the best-known example of creatures able to sense magnetic fields and to use them for orientation and navigation. Less well known are the magneto-sensing abilities of American cockroaches, which quickly become magnetized when placed in a magnetic field.

Just how these creatures use this ability is the subject of much speculation. But there is general agreement that a better understanding of biomagnetic sensing could help engineers design better sensors for other applications, such as microrobot navigation.

But before that can happen, engineers will need a far better understanding of how cockroaches sense magnetic fields and how they become magnetized themselves.

Enter Ling-Jun Kong at Nanyang Technological University in Singapore and a few pals who have measured the way American cockroaches become magnetized. In the process, they’ve made a remarkable discovery—it turns out that the magnetic properties of living cockroaches are strikingly different from those of dead cockroaches. And they think they know why.

The experiments are straightforward. Kong and co placed a series of living and dead cockroaches in a magnetic field of 1.5 kiloGauss; that’s about 100 times stronger than a fridge magnet. The team left the creatures in the field for 20 minutes and then measured how strongly they had become magnetized and how long it took for this magnetization to decay.

This suggests an answer to the conundrum. Cockroaches become magnetized because they contain magnetic particles that become aligned with an external magnetic field. These particles are trapped in a runny medium that has low viscosity in living cockroaches. But as soon as the creatures die, the medium begins to harden and its viscosity increases. That’s what causes the decay time to increase.

That’s interesting work that helps to answer some important questions about the way cockroaches interact with external magnetic fields. But it leaves plenty of mysteries.

First is the question of the nature of the magnetic particles—what are they? Biologists have found tiny particles of the magnetic mineral greigite (a type of iron sulphide) in ants, bees, and termites.

So it may be that cockroaches also contain particles of greigite. Indeed, Kong and co’s results are compatible with the presence of greigite particles with a radius of 50 nanometers or so but the results rule out the presence of related magnetic minerals such as magnetite.

Another question is where such particles might come from. Are they contaminants picked up by the cockroaches from their environment or are they biogenic, formed by a biological process inside the cockroaches themselves? Kong and co are unable to answer this.

However, they can throw some light on how cockroaches might use this kind of magnetization. They say that the decay time of 50 minutes in living cockroaches is too slow to be of any biological use. “Our data and model show that these magnetic particles cannot be responsible for magnetic sensing,” they say.

So if cockroaches do exploit magnetic sensing, they must use some other mechanism. The leading contender here is the radical pair mechanism in which a magnetic field influences the outcome of a chemical reaction.

Many biophysicists consider this the only mechanism that can realistically influence living creatures on a time scale that can be biologically useful. Perhaps cockroaches use this, too. “Our experiment provides support for other forms of magneto-reception, e.g. the radical-pair mechanism,” say Kong and co.

That’s interesting work that will be a stepping stone to better understanding biosensing of magnetic fields and of exploiting this ability in future generations of sensors.

Emerging Technology from the arXiv