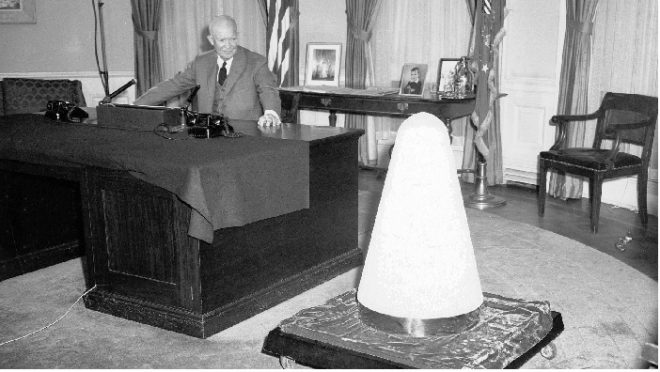 In December 1958, the Cold War got a spark of warmth when the US broadcast a holiday message of peace and goodwill around the world—from an orbiting nuclear missile.

A little more than a year after Sputnik, the first artificial satellite, was launched by the Soviet Union to kick off the space race, the US found a way to demonstrate its own technological prowess. Where Sputnik had communicated with the world by transmitted radio beeps, the US mission known as SCORE—Signal Communication by Orbiting Relay—would transmit a human voice from orbit for the first time.

“Through the marvels of scientific advance, my voice is coming to you from a satellite circling in outer space,” Eisenhower said in a recording played over short wave radio. “My message is a simple one. Through this unique means, I convey to you and all mankind America’s wish for peace on earth and good will to men everywhere.”

His message begins at the 35 second mark

A message of peace, carried on a deadly weapon, encapsulates the promise and peril of space then and today, 58 years later.

Back then, rockets were a multi-agency business. NASA had only been created a few months earlier, in July 1958, as part of a scramble to match the Soviets. The first US satellites put in space after Sputnik—Vanguard and Explorer—had been launched by the US Army and US Navy. SCORE, the third US satellite and first experiment with space communication, was put together by a small US Defense Department office that would eventually become DARPA, the Defense Advanced Research Projects Agency. 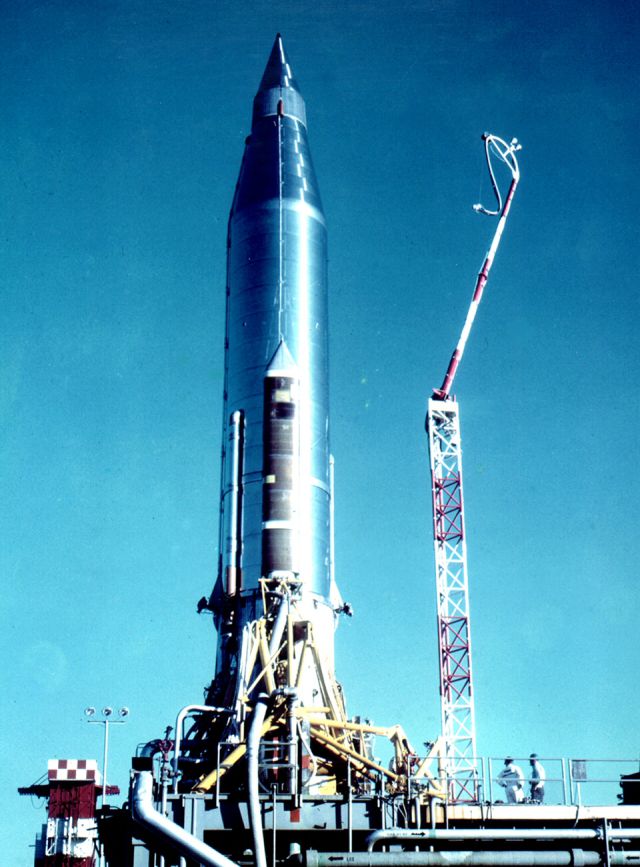 Rather than create a unique spacecraft for their experiment, the Defense Department engineers simply adapted an Atlas missile, which had gone into service the year before as the first US missile capable of carrying nuclear weapons between continents. Taking out the nuclear payload, the engineers inserted radio transmitters, tape recorders, and batteries, so that it could receive messages, record them, and relay them again.

The rocket was ready for launch on Dec. 18 with a recorded message from one of the team’s technicians. But at the last moment, Eisenhower was persuaded to record a message himself. The recording was transmitted to the rocket while it sat on the landing pad before launch.

Lift-off was successful, which was no easy feat: Five of the 13 Atlases launched so far that year had failed. Fear of an explosive outcome led the rocket’s mission to be kept secret even from many of the technicians working on the launch. Once the body of the rocket containing the communications equipment was in orbit, ground stations were able to link up cleanly. On Dec. 19, they transmitted the president’s message to the world, a first in the history of space communication. 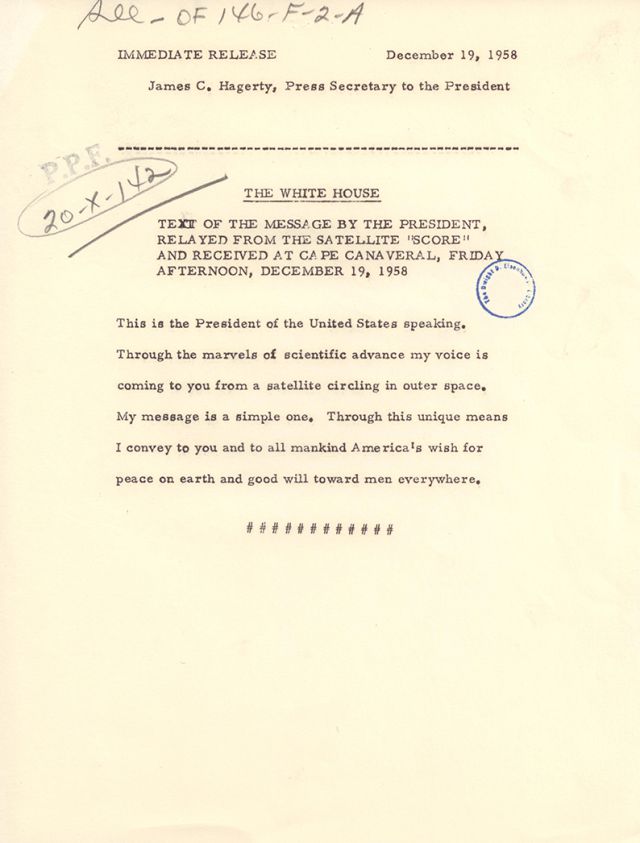 Still, the signal was fairly weak. The message was mainly heard in media broadcasts at the time: