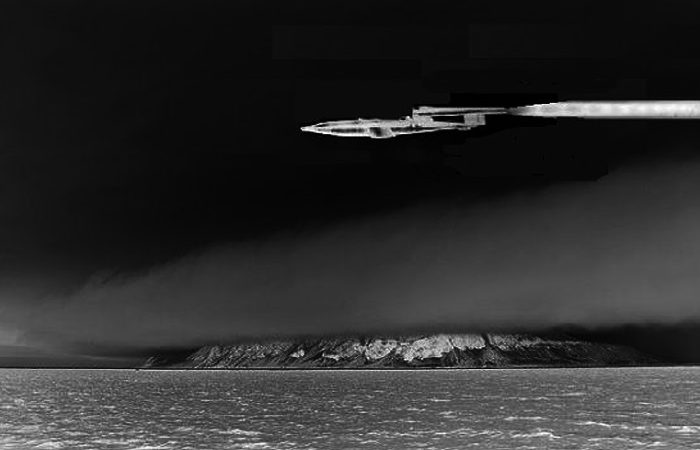 The Ghost Rockets of 1946, And Humanoid Encounter? 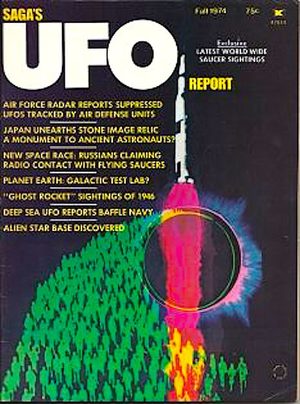 The seven page article presented, as was Farish’s and Clark’s wont, more than a representational account of the many cigar (rocket) shaped sightings over Sweden after World War II and other countries too.

And in their article, the usually cautious writers, mention an incident that allegedly took place during the 1946 sightings. However, the supposed event wasn’t published until 1971, well after many flying saucer [UFO] reports that contained ingredients that are found in the purported 1946 report.

In May 1946, just outside Angelholm, in southern Sweden, witness Gosta Carlsson, a well-know industrialist, while out walking spotted a disc-shaped object with a cupola that appeared to be a cabin with oval windows.

Above it was a mast, like a submarine periscope. Underneath the disc was “a big oblong fin which stretched from the center to the edge of the underside. There were also two metal landing legs. A small ladder reached to the ground from a door beside the fin. The object was approximately 53 feet in diameter and 13 feet from top to bottom at the middle.” The witness said he knew this because he measured the marks on the following day.

“There were a lot of holes around the edge of the disc, like those of a turbine, and jet-beams darted from the holes which burned the grass when the object departed. The light came from the mast. It was about 17 feet in height, and three antennae were suspended from its top.

” … something like a lampshade was hanging” from the mast, the lampshade “shining with a strange purple light” that lit up the object and the ground, “the light … flowing and pulsating … like water from a fountain.”

Carlsson then says that he saw a man in white coveralls, who raised his hand to halt Carlsson from coming closer. The man was about as tall as the witness but thinner and “there were others like him, but … no one said a word. It seemed as if they had just finished repairing a window because they put their tools away and looked at [Carlsson].”

There was a guard, three men and three women who came out of the object, “In all … 11 persons.”
“They all wore short black boots and gloves, a black belt around the waist and transparent helmets. The women had ashen-colored hair … They were all brown-colored, as if sunburned.”

Carlsson tried to walk closer but “the guard raised his hand again … The guard had a black box on his chest which was suspended by a chain around his neck. It looked like an old box camera. He turned it toward [Carlsson] which [Carlsson] thought he was going to take a picture.”

Carlsson heard a click on his forehead lamp and found later that the lamp did not work, despite having a new battery.

“One of the women came out of the cabin with an object in her hand” throwing it beyond the light and Carlsson “heard her laugh.” (The thrown object was retrieved by Carlsson and an investigation of it in 1971 showed nothing exceptional: It was composed mostly of silicon and its shape altered by the witness into a staff.)

Carlsson thought the disc-like object was a military device and after leaving the area, he went back by a different route to see the object again but saw “a bright red light ascending into the air. The light was streaming out of the ‘turbine holes’ of the craft, which had risen with a whining sound above the treetops. After reaching about 1400 to 1600 feet it slowed down briefly and ‘wobbled’ … the red light [growing] rapidly brighter [turning] purple just before the object flew away at a tremendous rate of speed.”

Now, how did this “tale” end up in he middle of a judiciously rendered account of the 1946 ghost rocket hysteria? It’s an odd insertion by two of ufology’s more sensible writers/investigators. The story, if true, and I doubt it is (it has a fictive patina) is grist for Jose Caravaca’s “Distortion Theory.”

For me, the whole ghost rocket block of sightings are suffused with hysterical overtones, Farish and Clark listing dozens of rocket observations, over Europe in the time-frame, not just Sweden or Norway.

The aftermath of the War presented anxieties and fears, mostly about the Soviets, and was rife for hysterical reactions by those who were encumbered by the war or worse. That people saw rockets, not flying saucers or space ships, goes to the reality of the Nazi V-2 deployments of the War, and the idea that the Soviets got hold of the manufacturing facilities of the Germans, when the War ended.

The ghost rocket scenarios are lumped into the flying saucer madness of the 1950s, along with the late 1890s Airship stories and the mysterious airplanes of the 1930 accounts, as support for or as preludes to what UFO buffs think is their mystery to solve: UFOs from outer space – an hysteria not unlike that which allowed Swedes and their neighbors to think they were seeing rockets all over the place in 1946.