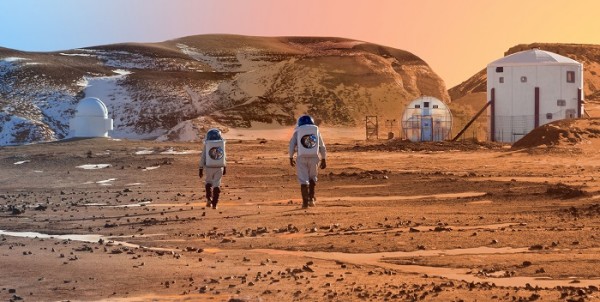 The Government of Mars Is Already Being Planned: A Glimpse at MARTIAN LAW

As NASA, tech billionaires, and other nonprofit organizations all vie to colonize the stars — with a particular eye on Mars as humanity’s next home — researchers in Seattle have recently offered a glimpse of what government on the Red Planet could look like.

As far back as 2010 — outlined in the U.S. National Space Policy and then given the budgetary green light by the NASA Authorization Act — the United States has advanced the idea that Americans could be living on Mars by the 2030s. A major milestone toward this end would be streamlining the ability to land human beings on an asteroid, which the space agency hopes to accomplish by 2025.

This is around the same time that Mars One, the Netherlands-based nonprofit research group whose stated goal is to establish a human colony on Mars by 2027, is slated to start rocketing the hardware needed to construct and maintain said colony in the Red Planet’s direction.

“A habitable settlement will await the first crew before they depart Earth,” Mars One says in its mission statement. “The hardware needed will be sent to Mars in the years ahead of the humans. This unmanned mission is currently scheduled for 2024.”

Elon Musk, the multi-billionaire CEO of Tesla Motors and private aerospace manufacturer SpaceX — and the man whose timetable for putting humans on Mars beats even that of Mars One — has long seen the colonization of the Red Planet as a means to save the species.

“I think there is a strong humanitarian argument for making life multi-planetary,” Musk told Aeon magazine when asked why we should focus on Mars when there are so many problems facing people here on Earth, “in order to safeguard the existence of humanity in the event that something catastrophic were to happen, in which case being poor or having a disease would be irrelevant, because humanity would be extinct.”

Even Amazon CEO Jeff Bezos, whose private aerospace company Blue Origin is focused primarily on moving heavy industry from Earth to outer space, says we absolutely should and will colonize Mars, “because it’s cool.”

But as more and more time, energy and capital are devoted to establishing a human presence on Mars, many are asking how the body governing such a colony will function.

One research group in Seattle, the Blue Marble Space Institute of Science, has recently penned a report addressing that very question.

The report, titled “A Pragmatic Approach to Sovereignty on Mars” and published in Space Policy, borrows from three already established treaties — the Antarctic Treaty System (ATS), the Outer Space Treaty (OST), and the United Nations Convention on the Law of the Sea (UNCLOS).

Using 1967’s Outer Space Treaty as a foundation, the researchers targeted the potential problems that could arise as citizens from different countries begin to cohabitate on a new planet — namely, how much power should a central governing structure possess, how to handle the inevitable disputes that will arise, and how resource rights should be allocated and protected.

The governing body proposed by the Blue Marble Institute is called the Mars Secretariat. As the name implies, this body would be a weak central authority whose purview would primarily be administrative — record maintenance, secretarial duties, and the like.
Martian inhabitants themselves would wield significant local power.

Legally, however, this power would be derived from inhabitants’ host nations, “with conflicts to be resolved diplomatically or through a temporary tribunal system composed of representatives of other Mars colonies.”

As for resources, the report proposes — for the early days of colonization, anyway — that claims be limited to around 100 km parcels of land. Colonists within that zone would have all economic rights to the resources in that parcel, though they would have no authority to prevent others from landing, or even building habitats, within that border.

“The right of peaceful passage through exclusive economic zones is…patterned after UNCLOS,” the report states, “which also restricts the degree of control that a colony can exert over the zone in which it operates.”

The OST states that “the exploration and use of outer space shall be carried out for the benefit and in the interests of all countries and shall be the province of all mankind.” To this end, the report further proposes the establishment of “planetary parks” and a “Mars tax.”

The parks would be preserved tracts of unclaimed land set aside for scientific and cultural use by all nations. The tax would be applied for the right to extract Mars’ resources, with the revenue being distributed to countries back home on Earth.

But eventually — assuming everything goes to plan — the stage will be reached in the future whereby inhabitants of the Red Planet will begin thinking of themselves as Martians, as opposed to colonists from Earth. And at that point, how much of any cobbled-together governing structure can those folks be expected to live by?

None, says political scientist Michael Byers from the University of British Columbia.

“In short,” he wrote in a January article for the Washington Post, “a Mars colony would be entitled to independence if the majority of colonists made this desire clear through a referendum.”

Citing the 1966 International Covenant on Civil and Political Rights, which established self-determination as a basic human right, Byers concluded that:

“Human rights are universal; they apply to every human being, on this planet and elsewhere.”