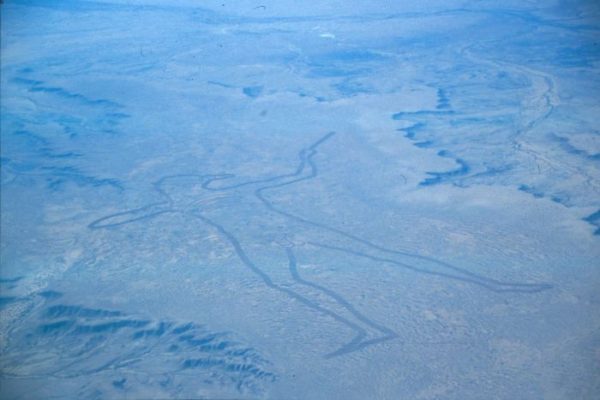 The Mysterious Marree Man of Outback Australia: Largest Geoglyph in the World

Etched into the dry sand of Australia’s barren outback is the world’s largest geoglyph, known as “Marree Man,” an enormous figure of an Aboriginal man hunting birds or wallabies with a throwing stick. Unlike other anthropomorphic geoglyphs found around the world, which were constructed by ancient civilizations, Marree Man was carved into the landscape only 16 years ago. However, its very existence presents one of the greatest mysteries Australia has ever seen; the geoglyph is so large that it is viewable from space, yet not a single witness can attest to its creation and to this day, its creator and the reason for its construction remain unknown.

The Marree Man geoglyph lies on a plateau of arid land, approximately 60 kilometers (37 miles) west of the tiny township of Marree (population = 60) in South Australia. Trevor Wright, a charter pilot, was flying between the townships of Marree and Coober Pedy on June 26, 1998, when he spotted the towering figure in the landscape below.

The figure is 4.2 kilometers (2.6 miles) tall with a perimeter of 15 by 28 kilometers (9.3 by 17.4 miles). At the time of discovery, the outline was 30 centimeters (12 inches) deep and up to 35 meters (114 feet) wide. Surveyors speculate that the figure was made by bulldozer and could have taken weeks to complete, yet no one claims to have seen or heard a thing. Only one track led into and out of the site, but no footprints or tire marks were discernible, and a thorough police investigation conducted at the time came up with nothing. 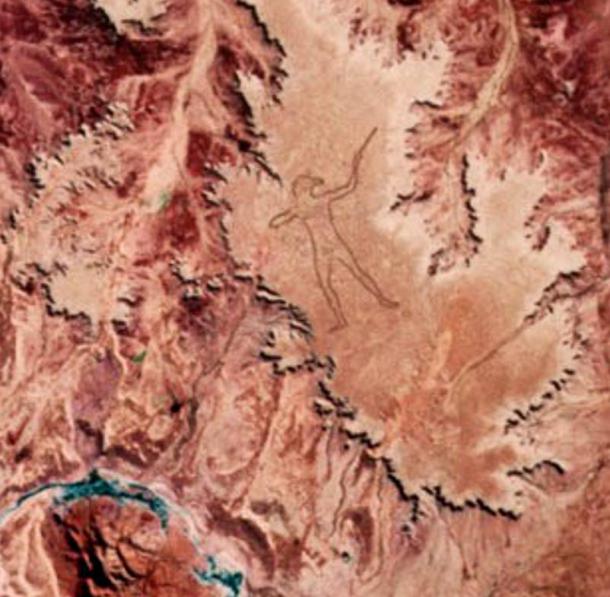 Not long after its discovery, several press releases were sent to the media from an anonymous source. A number of features of the writing seemed to point to a foreign author. For a start, the letter quoted measurements in miles, yards, and inches, instead of in the metric system, which is used in Australia. Furthermore, a number of phrases and names, such as “Queensland Barrier Reef” and “local Indigenous Territories,” are not terms used by Australians.

Adding to the mystery, a handful of peculiar items were found in a small pit at the site, including a satellite photo of the figure, a jar containing a small flag of the United States, and a note which referred to the Branch Davidians, a cult group that was based on a property near Waco, Texas, which was raided in 1993, leading to the death of the cult leader David Koresh, as well as 82 other Branch Davidian followers.

In January, 1999, officials found a small plaque buried close to the nose of the figure. It was an American flag with an imprint of the Olympic rings and a quote from “The Red Centre” by H. H. Finlayson, which read: “In honour of the land they once knew. His attainments in these pursuits are extraordinary; a constant source of wonderment and admiration.”

The quote came from a page that describes the hunting of wallabies with throwing sticks and contained photographs of hunters that looked similar to the Marree Man.

Investigators tried, unsuccessfully, to piece together this odd collection of clues. However, some suggested that they may have all been planted as red herrings, to divert attention away from the real creator.

Marree Man Theories Rumours were quick to spread around the tiny town of Marree. Some suggested that the creation of the geoglyph was a stunt pulled by a local scenic flight operator, who served to profit from the tourism generated by its discovery. Indeed, local charter planes found themselves working overtime to meet the demand for joy rides to see the spectacular figure on the ground below.

Other theories began circulating that Marree Man was the work of extraterrestrials or a warning to politician Pauline Hanson regarding racist comments made about Australian Aborigines.

A more plausible theory is that it was crafted by Bardius Goldberg, an Australian artist, who had expressed interest in creating a work visible from space. When questioned about it, he would neither confirm nor deny that he had created the Marree Man. Goldberg passed away before this theory could be fully investigated.

The giant geoglyph of the Marree Man was quick to become an icon of the small South Australian township and a popular tourist destination, but the famous carving can now barely be seen. While the site has never been accessible to the general public as it falls on Native title lands, the geoglyph is slowly fading through natural erosion. It is only a matter of time before the famous figure disappears forever, taking the secrets of its creation along with it.