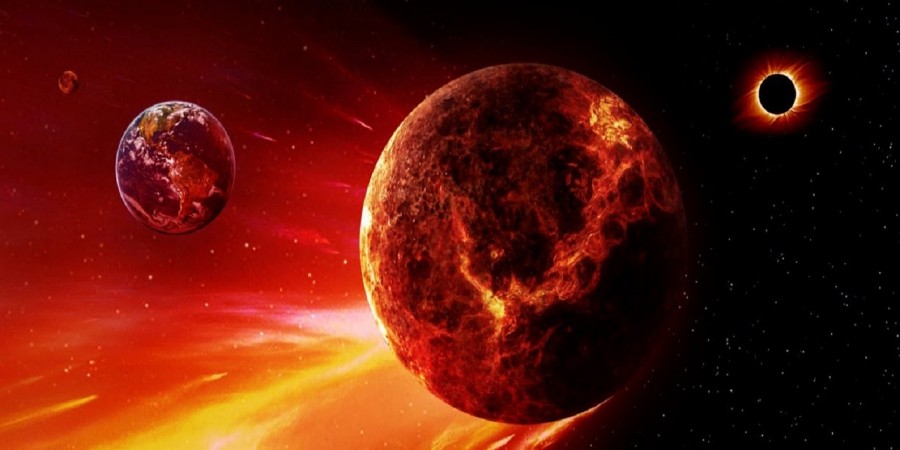 The Planet X Discovery May Help Predict the Apocalypse, Prepare Us to Stop It

Even if a massive meteor shower is inevitable, we’ve got time to develop the technology to stop near Earth objects.

Since first emerging on Earth 3.5 billion years ago, life has had a pretty rough go of it. Five mass extinctions have collectively eliminated 99.9 percent of all the species that have ever lived on the planet. Some of them have been directly caused by extraterrestrial events. Asteroids are not our friend. Now, new research out of the University of Arkansas suggests that those cataclysmic events may have been the predictable result variations in the orbit of a mysterious ninth planet in our solar system — a large, dark orb known to astronomers as Planet X.

Here’s the deal: Daniel Whitmire, a retired astrophysicist who now teaches math, first pitched an idea back in 1985 that a massive object in the outskirts of the solar system was creating periodic comet showers when its passed through the Kuiper belt every 27 million years. The planet’s mass was large enough to dislodge a bunch of rocks and cause them to hurtle through the system — and invariably, a big one managed to sometimes slam into the planet. The ones that were really big were responsible for causing the mass extinctions that have punctuated life on this planet.

Now, Whitmire has published a follow-up study in the journal Monthly Notices of the Royal Astronomical Society that doubles-down on that hypothesis with regards to new data about the Kuiper Belt and what the fossil record tells us about the history of life on the planet.

It’s a really intriguing idea. We don’t yet have enough evidence to confirm or deny Whitemire’s theory, but if its true, the biggest question it raises is exactly when the Planet might be passing through the Kuiper belt and creating another comet storm that could threaten life on this planet once again.

As mentioned, if Planet X exists, it would seem to have an orbit of 27 million years. That’s incredibly long — after all, the supposed Planet Nine we’re all hoping to find is expected to have an orbit of just around 15,000 years or so. Planet X seems to be something else entirely. The last major extinction event that killed the majority of life on Earth was the meteor that killed the dinosaurs. That was 66 million years ago. We’ve experienced other extinction events since, but they’ve been minor — and are mostly thought to have resulted from natural climate change and strange volcanic activity.

So that means we’re about due for another stretch of comets to hit us and end our misery, right?

That might be true, but these days, astronomers have a pretty good scan of the universe to pick up asteroids and comets that are heading towards us. After all, NASA was watching rock as small as a 100 feet in diameter for months — and estimated its flyby to a scale of a few thousand miles. If there was a life-threatening comet shower headed for us, we’d probably have between one and three years worth of notice.

We already have a major contingent of the scientific community trying to figure out what we can do to protect ourselves if and when that ever happens. Hell, even Vladimir Putin wants to get channel his inner Bruce Willis and save the world.

If Planet X is real, the odds of us having to worry about our safety from a comet shower in the near future are astronomically low. Future generations, on the other hand, may end up scrambling to build space shields before humans go the way of the dinosaurs.