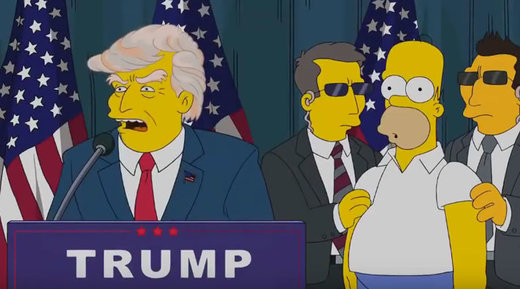 Homer, Marge, Bart, Lisa and Maggie have become household names since ‘The Simpsons’ first aired in 1987. But the show’s uncanny ability to consistently predict future events has many believing the cartoon’s creators have a crystal ball.

One of the most prominent of their “predictions” relates to the current state of US politics. Donald Trump’s presidential bid was first depicted on the cartoon series – playing out in a 2000 episode some 16 years before the billionaire was actually chosen as the Republican Party’s nominee.

And that’s far from being the only case of an episode of The Simpsons reflecting future events. Here, RT lists six other past episodes in which The Simpsons bizarrely predicted, depicted, or referred to major contemporary events that were yet to unfold.

In a 2008 episode, Homer’s voting machine changed his vote.

Four years later, a real life electronic voting machine was taken out of service after being captured on video changing a vote for Barack Obama into one for Mitt Romney.

The 2016 Nobel Prize in Economics is the latest chilling Simpsons prediction to come true.

In 2001, Bart, Milhouse, Nelson, and Ralph form a boy band named the Party Posse, make a hit song called Drop da Bomb, and in their music video, they drop a bomb on what appears to be an unknown Arab country.

Eerily, the Syrian opposition flag is prominently displayed in the sequence.

The question now being asked is why a flag – adopted by post-independence Syria in the 1930s and used up until the ’60s – was depicted given the reality in Syria now. It is also noteworthy that there was no functioning Syrian opposition when the episode aired.

There was a reference to the Ebola crisis in a 1997 episode, in which Marge tries to coax a sick Bart out of bed. She suggests he read a book, before producing one entitled Curious George and the Ebola Virus.

Then there’s the 1997 episode entitled The city of New York vs. Homer Simpson. In the show, Lisa Simpson presents a magazine entitled New York. The theory making the rounds is that the magazine’s cover design alluded to the 9/11 attacks that would take place four years later.

In this clip, taken from the Simpsons Treehouse of Horror XIX Episode, “How to Get Ahead in Dead-Vertising” which first aired in November 2008, Homer is paid to kill the music artist, Prince.

So, whether you are a conspiracy or a coincidence theorist, the question now is: what will The Simpsons predict next? You know, the series has made reference to a Trump presidency – though not in 2016.

In the episode ‘Bart to the Future’, Homer’s son is given a glimpse into 2030, where Lisa has assumed the presidency from Trump, who has left the country in debt: “We have inherited quite a budget crunch from President Trump,” she says.