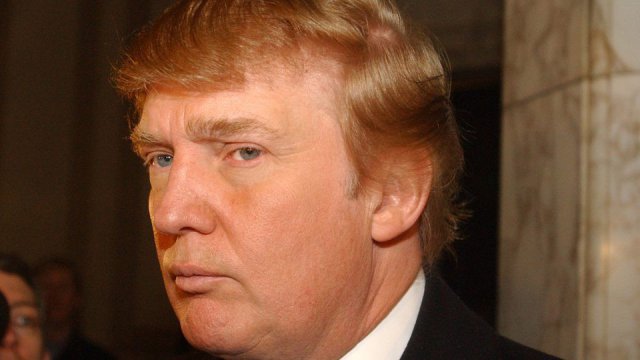 US president Donald Trump earned nearly $153 million in 2005, according to a report by The Daily Beast and the Rachel Maddow show on MSNBC.

Trump and his wife Melania paid $38.4 million in tax on the income, a tax rate of some 25%, according to the tax return that MSNBC posted online (pdf). That’s about the tax bracket for a married couple making from $75,000 to $152,000. Of that, though, just $5.3 million was in regular federal income taxes, suggesting that Trump was still offsetting losses of $916 million that he’d declared in a 1995 return previously published by the New York Times (paywall). There was $1.9 million in self-employment tax. And $31.3 million was paid in “alternative minimum tax,” which is applied to high income earners with big deductions to insure they “pay at least a minimum amount of tax,” the IRS says.

This is a tax that Trump has vowed to abolish, and which nets the US Treasury tens of billions of dollars each year from the country’s richest.

The Daily Beast and Maddow cited reports by Trump biographer David Cay Johnston, who runs the website www.dcreport.org, which was down at the time of publication. The news, however, reveals little on longstanding questions about Donald Trump’s overall wealth and the sources of his income. Johnston obtained only the 1040 form, the first two pages of the personal tax return. As Maddow noted on her show, the full return would include many other pages that would give an insight into how Trump’s taxes were calculated as well as his net worth.

“There must be something hiding in his returns,” Johnston said to Maddow. Whatever that might be, it wasn’t made available tonight.

Trump repeatedly refused to release his tax returns during the presidential campaign, defying 40 years of precedent. Before the election, he claimed that he could not do so because he was under audit by the IRS. (It wouldn’t confirm whether he was or not—and an audit is no bar to releasing returns.)

Then, shortly before his inauguration, he told reporters that he would not release them because “the only ones that care about my tax returns are the reporters.” That was clearly untrue; the first petition filed to the White House website, on the very day of his inauguration (Jan. 20), demanded that he release his tax returns, and reached 100,000 signatures in just a day, requiring the White House to address the request before April 20. It now has more than a million signatures.

Why Trump has refused to release his returns is a subject of much speculation. In his 2005 book TrumpNation: The Art of Being The Donald, Tim O’Brien cited three people “with direct knowledge of Trump’s finances” who estimated Trump’s net worth was “somewhere between $150 million and $250 million.” Trump had told O’Brien, now executive editor of Bloomberg View, earlier that year that he was worth “five to six” billion. Trump responded by suing O’Brien and his publishers, Warner Book Group and Warner Books, for $5 billion. The suit was thrown out in March 2009, and Trump lost a subsequent appeal.

One hypothesis for Trump’s secrecy, therefore, is that he doesn’t want to admit to being worth a lot less than he has claimed. Another is that the returns will turn out to reveal dubious business deals or sources of income.

When asked in a deposition if he had always been “completely truthful in all your public statements about your net worth of properties,” Trump replied, “I try.” He continued: “My networth fluctuates, and it goes up and down with markets and with attitudes and with my feelings, even my own feelings, but I try.”

The White House reacted to the news with a statement that accused Rachel Maddow’s show of being “desperate for ratings” and having violated the law in obtaining and publishing the returns.