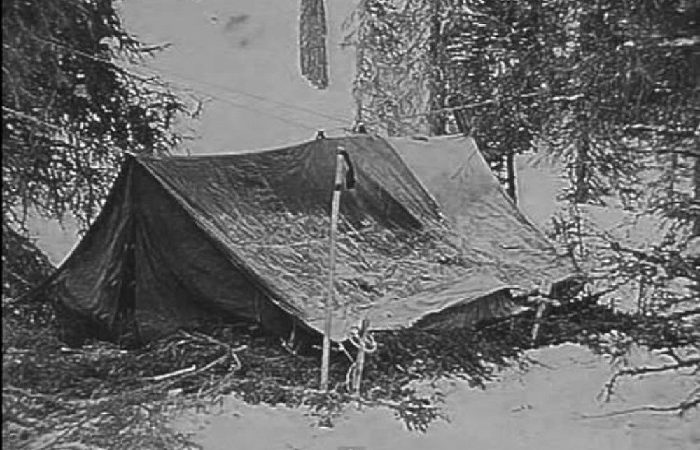 The Terrifying Mystery of ‘The Dyatlov Pass Incident’

This is one of the most troubling and creepy incidents ever… 57 years later, the mystery of the 9 Russian hikers who were found dead in extremely strange states remains unsolved. I chose to share this in two forms, the first is a short intro followed by a video describing the incident and the second sharing is all written for those that would like to read about it in a bit more detail.

The story of the Dyatlov Pass incident is chilling. What’s even more haunting is the fact that this mystery remains unsolved to this day. Nine Russian hikers set out on an expedition in the Russian tundra in 1959. The students went missing, and were later found in shocking and confusing conditions. The tent at the camp was ripped open-from the inside. The hikers were found dead in remnants of the clothing they went to sleep in, and the bodies were scattered around the site, some far from the site. Russian investigators opened a case, reported no evidence of foul play, and quickly shut the case. The clothing of the hikers were also found to contain high levels of radiation. The hikers also showed evidence of heavy internal trauma, including fractured skulls and broken ribs. Still, the Dyatlov Pass incident remains a mystery.

1. The nine hikers of the Dyatlov Pass incident were missing ten days after their expected arrival home.
00:41

2. The tent from the Dyatlov Pass incident was found ripped open from the inside.
01:00

3. Infrasounds exist just below the level detectable with human ears.
03:14

For those who might prefer to read about it instead of watching the video:

Have you ever come across a discarded shoe on the sidewalk and wondered what circumstances led to its abandonment? Take that mildly unsettling scenario, raise it to the tenth degree and you might have a situation that begins to approach the strangeness of what happened at the Dyatlov Pass in 1959.

That was a bad year for Igor Dyatlov. The 23-year-old mountaineer was leading a party of 10 hikers — students from the Ural Polytechnic Institute — through the Ural Mountains in west-central Russia. Just before Dyatlov and his crew were preparing to scale towering Mt. Ortoten (whose name supposedly translates to “Don’t go there” in the local Mansi language), a hiker named Yury Yudin fell ill and was forced to remain behind in Vizhai, a local village.

The illness, it turns out, was a stroke of luck for Yudin: He was the only one who would live to see 1960.

The chronology of the Dyatlov Pass incident has been well documented; there’s little disagreement about the known facts. When the group failed to show up at their destination, search parties were dispatched to locate them. (It’s worthwhile to note that everyone in the party was an experienced mountaineer, and that the terrain they’d already crossed to reach the pass was serious stuff.)

The hikers’ abandoned tent wasn’t located until late February — about a month after they’d embarked on their trek. Entries in hiker diaries found at the campsite abruptly stopped on Feb. 2, indicating the group perished on or around that date. That would have been about a week after they’d left Vizhai.

The first five bodies to be found, which included Dyatlov himself, were discovered roughly a mile downhill from the campsite. Search parties looked for months before finding the remaining four corpses decomposing in a nearby ravine.

To this day, no one knows why the nine hikers died at Dyatlov Pass, but here are a few key features of the search party’s findings: 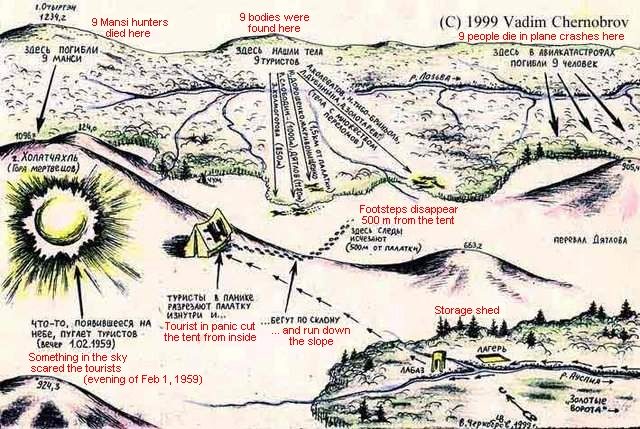 One of the more outlandish explanations mapped out | Vadim Chernobrov

No explanation has ever unequivocally solved the mystery of the Dyatlov Pass. There are theories, of course. “Paradoxical undressing” might explain the hikers’ nudity: When the body starts to freeze, nerve damage creates the sensation of overheating and people often take their clothes off “to cool down” even as they’re dying of exposure. But if paradoxical undressing is to be believed, why had they fled the warmth of their tents in the first place? A fall into the ravine might account for the severe bone fractures — but what happened to the woman’s tongue?

Other theories implicate military experiments, government cover-ups, unknown creatures and paranormal activity. Some eyewitness accounts hold that the corpses’ skin and hair turned strange colors, though many of these claims have been debunked.

One plausible theory suggests that the campers heard a loud sound that convinced them they were about to be buried under an avalanche. Then, the theory goes, they fled the tent as quickly as possible (hence leaving much of their winter gear behind) and got lost in the darkness. Once they realized there was no avalanche coming, they tried to make it back to camp and got lost. The injuries sustained in the ravine can be explained by an avalanche that would have come later — the snow’s accumulated weight might have been able to fracture bone without incurring much soft tissue damage. As for the radiation, it could have been from the use of camping lanterns that contain Thorium, an element known to emit alpha particle radiation. Alternately, it could have been from secret military weapons testing that the government was conducting in the area.

The official explanation as offered by the Soviet government a mere few weeks after the last body was recovered? The demise of the Dyatlov party was the result of “an unknown compelling force.”