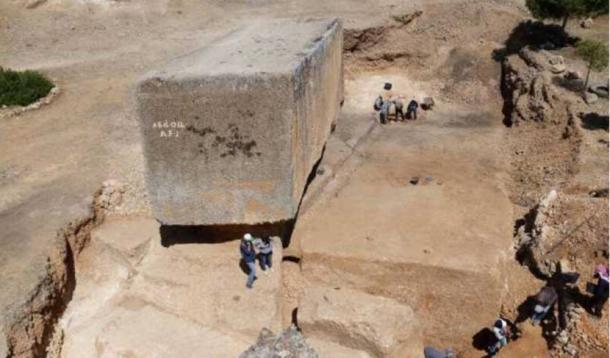 The Trilithon: Most Enormous Megalithic Block from Antiquity Revealed

German Archaeological Institute has found an ancient stone quarry of Baalbek. It has found out the size and weight of an enormous stone block. This block was carved by hand. Baalbek was discovered in 7000 to 12,000 BC. It was known as Heliopolis or the City of the Sun. This empire was one of adoration and a sanctuary. There was a Temple of Jupiter. It was built on stone blocks. 27 of these stone blocks formed the foundation, and each weighed 1,000 tons. Original research thought the Temple foundation was built by the Romans, but that is untrue. The style and appearance do not match Roman’s style. It is believed an extinct civilization built the foundation. The Romans came along and built over the foundation.

The rock came from a quarry found 800 meters from the temple. Also at the quarry, it was discovered that two man-made stones were never moved due to brittle Stone: The Stone of the Pregnant Woman and Hajjar al-Hibla. But the biggest stone block has just been found at the quarry. It weighs 1,650 tons. It is 64 feet in length, 20 feet in width, and 18 feet in height. This rock was meant to be used to transport and used as a foundation. Further research is needed to explain why the stone block was never used for the foundation.

Why were the stones never moved? Almost sounds like maybe social dishevel caused an abandonment of the quarry and Baalbek. Fighting between tribal groups can cause the altars and gods to be destroyed. Maybe the group moved on and established a settlement elsewhere. Maybe after the stones were finished, there was not enough man power to carry the stone block to where it was needed. I believe that a similar demise of this civilization occurred like what occurred in Stonehenge or Easter Island. Both places it looked like one day, everything disappeared. It would explain why the foundation was left for the Roman to use.