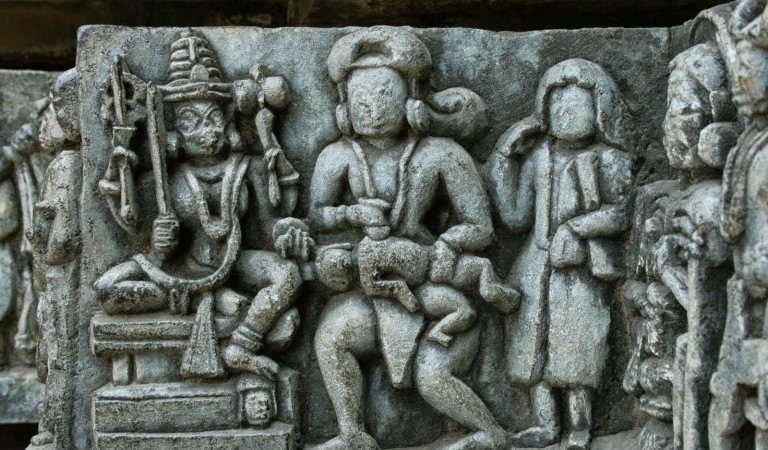 The Truth About Easter And The Secret Worship Of The Anunnaki

The following article is based on J. R. Terrier’s book “The Easter Celebration – History of Its Hidden Origins“.

Easter is an annual celebration observed throughout the Christian world. However, there are absolutely no verses in the Bible that authorize or endorse the keeping of this tradition.

Further – the Bible does not mention anything about Easter eggs, Easter baskets, Easter bunnies, or even Lent. The author includes convincing evidence to show that these very items were parts of the pagan rituals of the Mystery Religion of ancient Babylon. 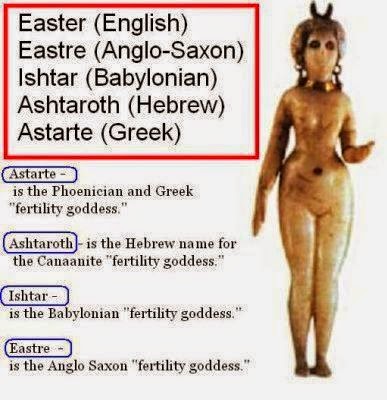 Where did the tradition of celebrating Easter originate?

The author exposes the hidden accounts of the original Easter festival which was initiated several thousand years ago – many years before the birth, death, and resurrection of Jesus.

The name Easter actually comes from Ishtar / Easter who was worshiped as the moon goddess, the goddess of spring and fertility, and the Queen of Heaven. She is known by so many other names in other countries and cultures that she is often referred to as the goddess of one thousand names.

[Inanna is the Sumerian name of Ishtar, and definitely the most important one. Inanna was the granddaughter of Enlil, who in turn was Anu’s son. Anu was the highest ranking Anunnaki and his name translated “Great Sky Father”. Anu was revered as ‘god of the Heavens’ and he was the central figure of mankind’s first religion. According to the Sumerian tablets, he only visited Earth twice].

(John 8:44, II Corinthians 11:14, 1 Peter 5:8) Ishtar – the Babylonian goddess – is the one for whom Easter is named. Ishtar is but another name for Semiramis – the wife of Nimrod. This post-Flood festival was part of the false religion Mystery Babylon and was started by Nimrod and his wife Semiramis (also known as Ishtar).

They not only instituted the building of the Tower of Babel, they also established themselves as god and goddess to be worshiped by the people of Babylon. They are the co-founders of all the counterfeit religions that have ever existed.

Nimrod was worshiped as the Sun God. He was worshiped in numerous cultures and countries under a variety of names: Samas, Attis, Uti, Merodach/Marduk, Ninus, Bel/Baal, Moloch, Tammuz – the list is virtually endless. [He was also known as Dumuzi by the Sumerians and as RA by the Egyptians.

Millions of people are unknowingly worshiping and praying to this pagan goddess today. What is her present-day name?

The Babylonians celebrated the day of Ishtar / Easter as the return of the goddess of Spring – the re-birth or reincarnation of Nature and the goddess of Nature. Babylonian legend says that each year a huge egg would fall from heaven and would land in the area around the Euphrates River.

[The pope’s ceremonial clothes copy those worn by the ancient priests of Dagon, and not by coincidence. According to the Sumerian tablets, when the Anunnaki god Enki first arrived on Earth, he landed his space ship on water. He later emerged from water wearing his ‘scaly fish-suit’ (astronaut’s suit?). Thousands of years later, the ceremony of the fish god was still celebrated in Akkadia, Assyria and Babylon, by the priests of Dagon… and seemingly it still is today].

In her yearly re-birth, Ishtar would break out of this egg and if any of those celebrating this occasion happened to find her egg, Ishtar would bestow a special blessing on that person. Does this explain the origin of our modern-day tradition of Easter eggs and baskets and Easter egg hunts? 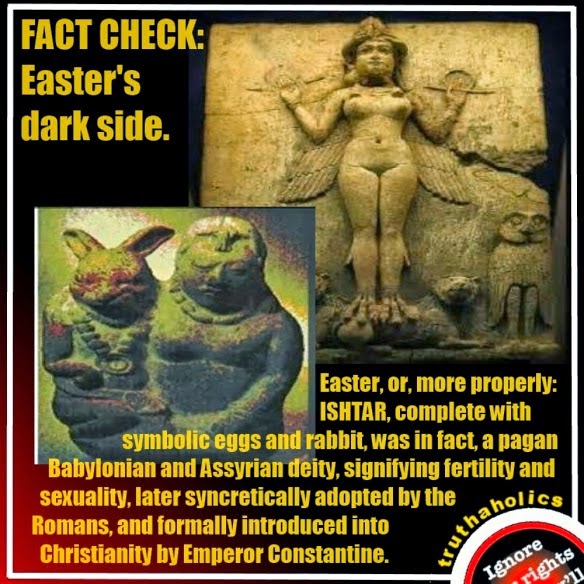 Other pagan rites that were connected with this celebration and which are part of our modern Easter tradition are Easter offerings to the Queen of Heaven (consisting of freshly cut flowers, hot buns decorated with crosses, and star-shaped cakes); new clothes to celebrate this festival (The pagan priests wore new clothes or robes and the Vestal Virgins wore new white dresses or robes and bonnets on their heads.); and sunrise services (to symbolically hasten the yearly arrival of Ishtar’s egg from heaven – the re-incarnation of the spring goddess).

[The Vatican is secretly perpetuating the ancient pagan rituals and the worship of their ancient “gods” – a.k.a. the Anunnaki. The shadow religion of the world’s “elite” is Satanism and all the positions of power are occupied by Satanists].

Easter has its origins in the world of the occult. The Occult / Satanic calendar is comprised of four periods of 13 weeks each. Occultists believe that numbers contain inherent power, and many base their lives on numerology. Numerology is also a key component of astrology – another system occultists follow closely. Thus the occult calendar is divided into 4 parts of 13 weeks each. Note that 13 x 4 = 52 weeks – our year.

According to 8th century scholar St. Bede (also known as the Venerable Bede / Bede, the Venerable), the name Easter is derived from the Scandinavian “Ostra” and the Teutonic “Ostern” or “Eastre” – both of whom were goddesses of mythology and were identified with spring and fertility.

Festivals for these goddesses were celebrated on the first day of the vernal equinox – March 21. Important parts of these pagan celebrations included the rabbit, red eggs, and gifts – all of which represented fertility. Easter is steeped in the Mysteries of ancient Babylon – an evil and idolatrous system.

The Satanic Ritual of Sacrificing Children

Every year, the priests of Ishtar would impregnate young virgins on an altar dedicated to herself and her husband*. The children were born on Christmas (!!!), and the next year they were sacrificed in the Easter’s Sunday at the sunrise service. The priests would take Ishtar’s eggs and dye them in the blood of the sacrificed children.

*Inanna’s husband was none other that the infamous god Moloch or Melekh, to whom children were – and still are – sacrificed in Satanic rituals. Satanism is the religious worship of the Anunnaki, and the human and animal sacrifices were/are part of the rituals.

If you’re finding it hard to believe, then here is an excerpt of the Encyclopaedia Judaica, which identifies Ishtar/Inanna and her husband as the gods to whom children were sacrificed:

“(…) The identification of Hadad-Baal with Moloch provides the background to Jeremiah 32:35, which fulminates against the bamot-altars of Baal in the valley of Ben-Hinnom where male and female children were burnt to Moloch, i.e., Baal-Hadad. Furthermore, a series of Assyrian-Aramean documents analyzed by K. Deller showed that Adadmilki or Adadšarru (“Adad the king”) was actually the god to whom children, sometimes firstborn, were burned (see below).

“The Assyrian material sheds new light on II Kings 17 where Adadmelech (to be read instead of Adrammelech) is the god to whom the Sepharvites burn/dedicate their children (verse 31). Adadmelech in this verse stands next to Anammelech who has been correctly related by scholars to Anath who bears the title ‘Queen of Heaven,’ the standard term for Ishtar in Akkadian (šarrat šamê; cf. Sumerian nin.anna.ak = Inanna). The pair Adad and Ishtar, or the ‘king’ and the ‘queen,’ are the ones to whom children are dedicated in the Assyrian-Aramean documents quoted above.” – The Cult of Moloch, Jewish Library;

The following image was secretly taken during a Satanic ritual in which a human body (child?) was burned in front of a wooden owl statue dedicated to Ishtar/Inanna/Moloch, at Bohemian Grove:

The following image was secretly taken during a Satanic ritual in which a human body (child?) was burned in front of a wooden owl statue dedicated to Ishtar/Inanna/Moloch, at Bohemian Grove: 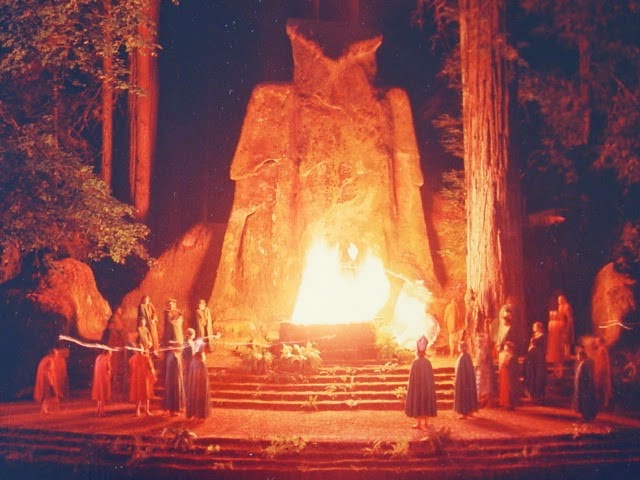 Most of the world’s “elite” (active and former Presidents, Prime Ministers, Politicians, Judges, etc. and even Royalty), take part at this annual ritual. Notice the fish-god priests conducting the ritual. Here is a depiction of Ishtar/Inanna flanked by a couple of owls, and designed to look like an owl herself (notice the legs and wings): 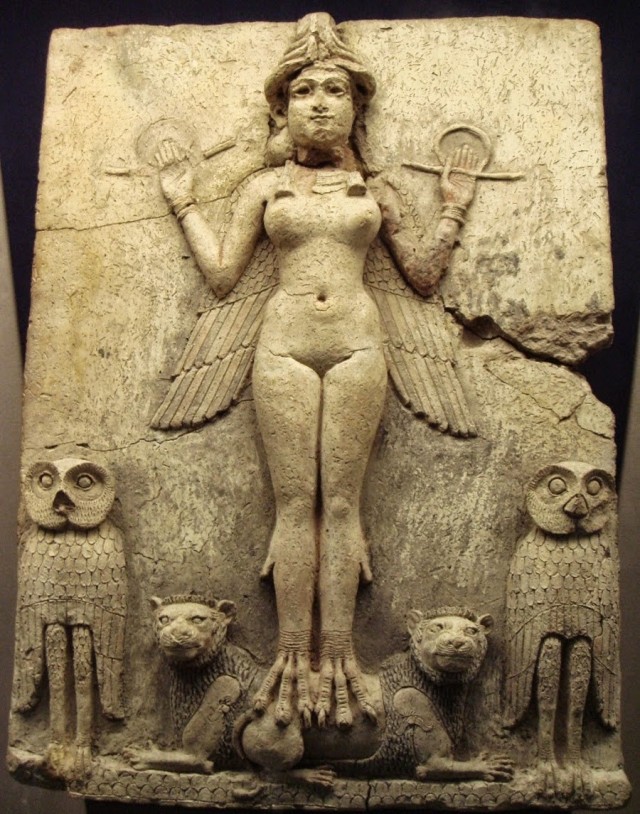 Our traditional Good Friday to Sunday celebration however only accounts for Jesus’ being in the heart of the earth for two nights and one day. Were the facts of Jesus’ death, burial, and resurrection purposely distorted? Learn who is not telling the truth — and why!

The author has investigated credible and reliable ancient sources to uncover the real origins of our Easter tradition. Was Jesus nailed to a cross or a tree? Is the true church a physical building — or is it something much more?

There are absolutely no verses anywhere in the Bible that authorize or endorse the keeping of an Easter celebration. Further, the Bible says nothing about the practice of observing Lent, dying Easter eggs, having Easter egg hunts, baskets of candy, bonnets – and so on. Easter has long been known to be a pagan festival. America’s founders knew this.

“Not until after the Civil War did Americans begin celebrating this holiday… Easter first became an American tradition in the 1870’s… The original 13 colonies of America began as a Christian nation, with the cry of ‘No king but King Jesus’. The nation did not observe Easter within an entire century of its founding.”

Most people accept traditions as fact because they have been part of our culture for so long. Unfortunately, most of these traditions are dark and gory Satanic rituals.

Trust me, I am just as disgusted as you are (or should be), but the truth must be known.