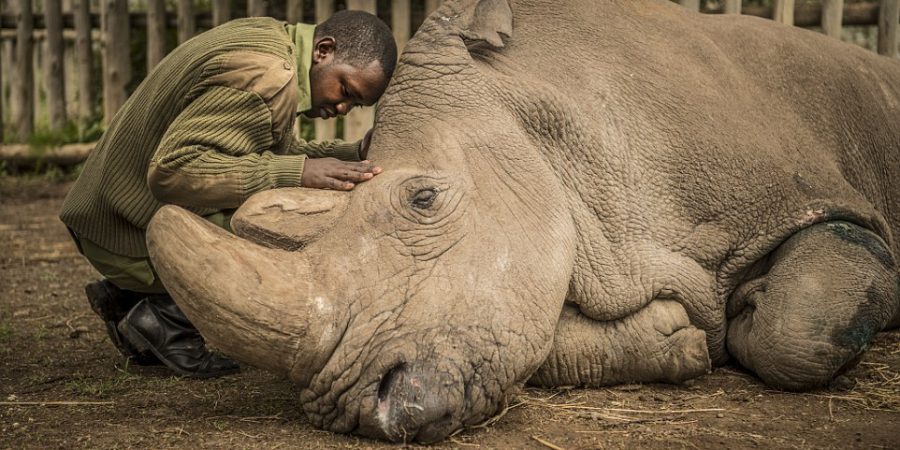 “Northern white rhino is thought to be extinct in the wild due to poachers”.

When will humans horrific and destructive affects on animals ever end?!

Wildlife officials at Ol Pejeta Conservancy euthanize the rare rhinoceros due to severe pain in his muscles and bones.

The life of the last known male northern white rhinoceros has sadly come to an end. The 45-year-old rhino named Sudan was put to sleep on Monday by officials from the nonprofit Ol Pejeta Conservancy in Kenya, after it became clear the animal was in extreme pain from age-related health issues and a series of infections.

“Once his condition worsened significantly and he was unable to stand up and evidently, suffered a great deal, the decision to euthanize him was made by his veterinary team,” according to an official statement from the Ol Pejeta Conservancy.

The last of his kind, Sudan leaves behind two females of his subspecies — Sudan’s 27-year-old daughter Najin and 17-year-old granddaughter Fatu.

Sudan was unable to breed with the female rhinos in captivity, and his plight came to the world’s attention last year when the Ol Pejeta Conservancy signed up Sudan for Tinder in search of an eligible mate and to raise funds for research into breeding methods.

Previously, Sudan lived at the Dver Kralove Zoo in the Czech Republic before he was transferred to Ol Pejeta Conservancy near Nairobi. The northern white rhino is thought to be extinct in the wild due to poachers.

“It’s very sad to lose Sudan because it shows clearly the extent of human greed and what sort of impact humans beings can have on nature,” Samuel Mutisya, head of wildlife conservation at Ol Pejeta, told Reuters on Monday. “If we don’t take care of what we have, we will definitely continue to lose it, particularly lose other species that are currently endangered.”