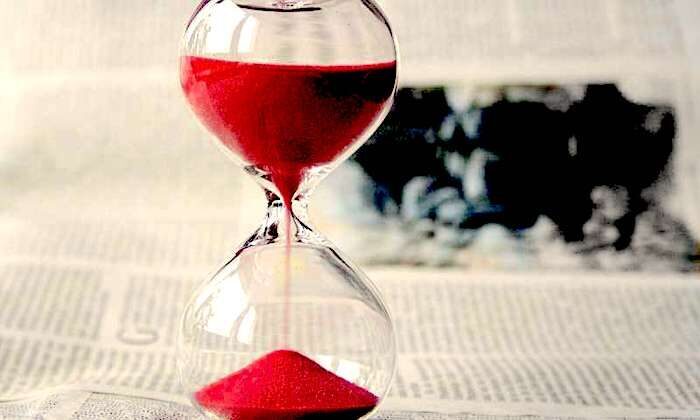 A trio of theoretical physicists at the Pennsylvania State University has calculated the upper limit for the possible quantization of time — they suggest 10−33 seconds as the upper limit for the period of a universal oscillator. In their paper published in the journal Physical Review Letters, Garrett Wendel, Luis Martínez and Martin Bojowald outline their theory and suggest a possible way to prove it.

For many years, theoretical physicists have been trying to explain a major problem — the general theory of relativity suggests that time is a continuous quantity, one that can move slower or faster depending on acceleration and gravity conditions. But quantum mechanics theories suggest that time ticks away at a steady pace, like the frames of a movie being played out. In this scenario, time must be universal. For both theories to be right, this contradiction must be explained in a rational way.

Some theorists have suggested that one possible explanation for the apparent discrepancy is that time can be quantized as spacetime, similar to theories describing quantum gravity. In such a scenario, spacetime is not described as continuous, but is instead divided into smaller units, which would by necessity have to correspond to the Planck length. This is, of course, far too small to be detectable. The theory would also require that such discrete packets of time would each expire. This scenario suggests there would need to be a universal clock that ticks away at a very small unit of time. And under this scenario, universal time would exist throughout the universe and also interact with matter. It also raises the question of how fast would such a clock tick.

In this new effort, the theorists have developed a theory to describe the upper limit of such an increment. In their model, they suggest that a universal clock would be a quantum oscillator that regularly switches between two states. To calculate its pace, they envisioned it as being coupled with a slower oscillator similar to an atomic clock. In their model, they envisioned the net energy of the two oscillators as always being the same. In this scenario, the two oscillations would have to desynchronize over time. And the theorists used that divergence as a way to calculate the upper limit for the tick of the universal clock. They even suggest that despite an inability to measure such a short tick, it should be possible to verify their theory by instead attempting to measure the desynchronization of the two oscillations.