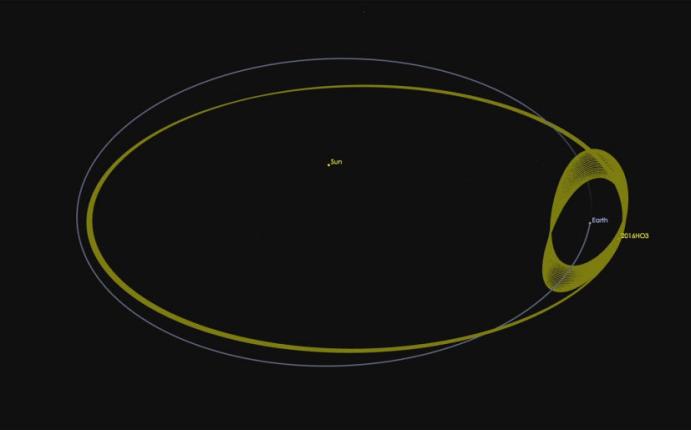 There is a Faint Spec of Light Following Earth, But What is it?

In 2016, astronomers discovered an object loosely circling Earth. Named “2016 HO3,” the faint speck of light travels around the sun alongside our planet, always at least 38 times as far away as the Moon. What is it? Astronomers at the University of Arizona recently used the Large Binocular Telescope on Mount Graham to learn more about 2016 HO3, and they have an answer. Scroll past the video to learn more.

It’s an asteroid, no more than 100 meters across, as opposed to, say, a burned out rocket booster or other piece of Apollo space junk.

“Our observations show that HO3 rotates once every 28 minutes and is made of materials similar to asteroids,” says University of Arizona professor Vishnu Reddy who led the research team.

One way to visualize HO3’s orbit is by picturing a hula hoop dancer — the sun in this analogy — twirling two hoops around the hips at the same time, ever so slightly out of sync. While it orbits the sun, the object makes yearly loops around the Earth. As a result, the object appears to orbit the Earth, but it is not gravitationally bound to our planet.

“We refer to it as a quasi-satellite of Earth,” says Paul Chodas of JPL. “One other asteroid — 2003 YN107 — followed a similar orbital pattern for a while over 10 years ago, but it has since departed our vicinity. This asteroid is much more locked onto us. Our calculations indicate 2016 HO3 has been a stable quasi-satellite of Earth for almost a century, and it will continue to follow this pattern as Earth’s companion for centuries to come.”