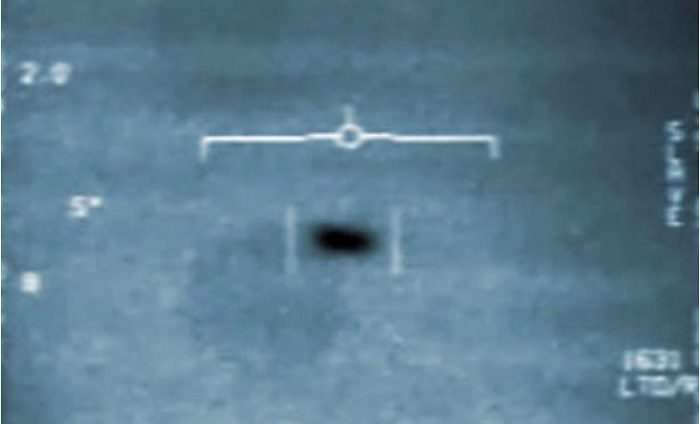 Could this have been an objecting coming from another dimension, or perhaps teleporting?!

Something else to consider, could this be all part of an elaborate desensitization ploy for the eventual disclosure?

A third US Navy craft witnessed the infamous tic-tac UFO in 2004 “form” in front of them, but the crew on board were ordered to “never talk” about what they saw.

It is widely believed two F/8-18E Super Hornets from the USS Nimitz were the first to witness the infamous UFO off the coast of San Diego on November 14, 2004, before a second team were sent out later and caught the object on camera.

Commander David Fravor, piloting one of the Super Hornets, has gained worldwide fame after his testimony was included in a bombshell New York Times article exposing the encounter in 2017.

But there are now claims a third aircraft was in the area at the time of the original sighting, with those onboard supposedly witnessing the craft “form in front of them”.

Dave Beaty – who has interviewed several pilots and witnesses of the UFO as part of his Nimitz Encounters documentary – told Jim Breslo on The Hidden Truth Show that the crew were on the surveillance plane E-2 Hawkeye.

“The gentlemen I spoke to, I checked his background and he did fly in the Hawkeye,” he explained.

“The reason he didn’t want to come forward was because he had to sign a document right after the incident saying to not talk about.

“Even going out on a limb and speaking to me was sketchy for him.”

Dave explained that the Hawkeye crew heard the radio calls from Princeton … Kevin Day instructing Fravor to intercept the tic-tac.

“At that time, the entire air crew noticed one of these objects form up on their plane before taking off,” he continued.

“All five aircrew would have seen that object.”

But when the crew landed, things took a weird turn. The director says they were led to a secure briefing room different to the normal one after training exercises. They were then told to sign non-disclosure agreements.

“It wasn’t really a volunteer process, it was more a ‘sign this and don’t ever talk about what you saw’,” he explained.

It comes after Daily Star Online revealed how a US Navy submarine also spotted the same UFO some four years later underwater.