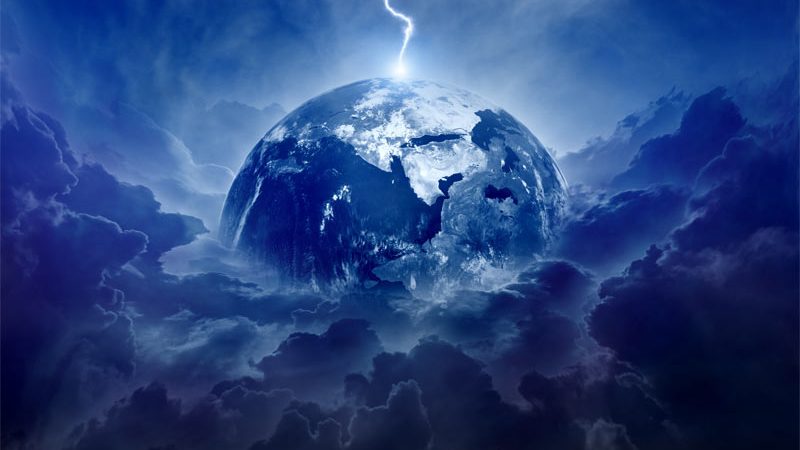 With popular shows like The Last Man On Earth buzzing the media, it sometimes makes you think what life would be like if.. you were the last person on Earth. From a Virus like the FOX show scripted, to possible Earth-shattering asteroids, we’re going to count down our picks for the 10 possible Natural Apocalyptic Events.

10. Pole Shifts This is the least likely of our possible apocalyptic events since the reversal of the planet’s magnetic field has happened before in history; although, we aren’t exactly prepared for this type of disaster. It is speculated that during the next pole shift there will be a 200-year span where our planet’s magnetic shield will be neutralized, allowing the sun’s solar blasts to strip away our atmosphere. Thankfully, that span is not long enough to significantly reduce the atmosphere for life to die out, but does have other serious implications such as increased risk of skin cancer, disruption to computers and navigational systems, and can lead to fires and possible ecological disruptions. Organisms that use magnetoreception to navigate, such as birds, bees and bacteria, might be disrupted, but is highly unlikely due to species that went through the last pole flip are still around.

9. Climate Change – Global Warming Several different scenarios can lead to devastating climate change where humanity is crippled or wiped out, but we are going to focus on the cascading effects of global warming, granted in a very concise nutshell. Designated as non-linear climate shifts, singularities, or tipping points by scientists, experts are discovering indicators of possible catastrophes as we speak. Melting glaciers are disrupting local species of plant life and animals alike, as well as the North Atlantic Current, which, if disrupted could make the Euro-Atlantic climate colder and more storm prone. As permafrost melts, methane is released, a potent greenhouse gas, which in turn can affect marine plant life due to higher temperatures and acidity caused by the absorption of excess carbon dioxide from the atmosphere. Such reefs make up less than 1% of the Earth’s surface, but houses 25% of all marine life, which is essential for both the ecosystem of wildlife and people.

8. Pandemic A pandemic is a worldwide spread of a virus. Often times, infecting animals first, then transferring to humans, but this is not always the case. In 1918, a flu pandemic killed nearly 100 million people, and right now, HIV infects about 40 million people, and AIDS has caused more than 25 million deaths. Some viruses, like Ebola, are too lethal, killing their hosts before it can spread while other viruses spread very quickly but are cured before it can kill the host. How long before a virus strand evolves to contain the right combination of both? In a pandemic, borders will be closed and travel restricted to delay the virus onslaught, medical supplies, and medical personnel would be in short supply, and even with mitigation death rates may be high. Without a cure, this possible apocalyptic event could wipe humanity from existence.

7. Dark Matter Some scientists postulate that there may be a thin disk of dark matter running horizontally through our Milky Way galaxy and that our solar system, which moves around the galactic center about every 250 million years, may occasionally bob up and down through it in a weaving motion that lasts about 30 million years. These scientists also note that this pattern of Earth’s motion through the galactic disk seems to correlate with mass extinctions. As the Earth passed through this disk of dark matter, it would also absorb these particles which could lead to internal heating, volcanism, tectonic upheavals, changes in sea level and climate, or even change the Earth’s magnetic field, all of which are thought to contribute to extinctions. Some have even theorized that when our system goes through the dark matter disc, it can dislodge distant objects, sending them in our direction.

6. Solar Storms Solar Storms are triggered when flares, sunspots, coronal mass ejections or any eruption of mass and energy from the Sun tears into the earth’s magnetic field. It then operates much like a man-made electromagnetic pulse weapon, where the solar energetic particles strike the Earth with a force that ionizes the atmosphere, creating a vast cloud of energetic electrons that bounce around inside the atmosphere, destroying electronics and fusing conductive wires everywhere. This would most likely take out a few satellites in orbit as well as cripple our communication system, but many unforeseen problems could trickle down. Vital services like transportation and sanitation would shut down, and the loss of power would plunge the planet into darkness. But the most worrying aspects of this scenario are most governments have not shielded vital equipment for such an event and that a solar storm could reach us in as little as 12 hours.

5. Gamma Ray Burst It is believed that gamma-ray bursts are produced when a massive star goes supernova and collapses into a neutron star or black hole. From here, the prevailing theory is that an intense beam of gamma radiation that lasts from mere milliseconds to several minutes shoots like a beam from its polar regions. Capable of discharging the same energy our sun releases in its entire 10 billion year lifetime in just a few seconds, it could easily devastate Earth if close enough and aimed precisely in our direction. As this beam travels at the speed of light, we wouldn’t know it was going on until it was already underway and we would have no defense against it. Much of the Earth’s atmosphere would be burnt off and in the end, the Earth would likely be void of life.

4. Super Volcano There are six well-known super volcanos, Aira in Japan, Taupo in New Zealand, Lake Toba in Indonesia, and Yellowstone, Long Valley, and Valles Caldera in the United States, with others around the globe that have yet to be discovered. If one of these natural death machines ever erupted, it would erase virtually all life in a radius of hundreds of miles from the site, and entire continental regions further out would be buried meters deep in ash. The same ash would block out the sun, affecting weather and farming in the region. Furthermore, it could easily trigger an ice age that would last hundreds or thousands of years. Of the natural disasters on our list, this is one of the most likely scenarios; Yellowstone erupts in 600,000 to 700,000-year cycles, the last one being 640,000 years ago, meaning, it is due for an eruption at any given time.

3. Rogue Black Holes, Planets or Suns Hundreds of rogue black holes may dwell in the Milky Way. During mergers between galaxies, one of two possible outcomes can occur. The dominant black hole consumes the other, or, the black hole is ejected from the region, which often then gains speed and travels through the vastness of space in solitude. The same holds true for rogue suns and planets in their respective neighborhoods, except planets don’t merge, they collide. Granted that the odds of one of these elements hurdling through space directly at Earth are astronomically small, each could have an annihilating wake of destruction within their paths. To make things slightly worse, each in their own regard is difficult to detect within the background of space using our current level of technology.

2. Asteroids Made famous as the culprit in the destruction of the dinosaurs, then romanticized by the book and film industry, an asteroid impact is probably the most recognized apocalyptic event in the world, except perhaps a zombie outbreak. An asteroid impacting Earth would release a tremendous amount of energy equivalent to its relative size and velocity. The one that wiped out the dinosaurs was estimated to be seven to eight miles long and upheaved a dust plume that spread across the planet while forests and plant life caught ablaze and spread. Today that impact would have killed millions, leaving those who didn’t perish rummaging for resources. To completely obliterate the human race, though, an estimated 60-mile wide asteroid would have to collide with our world.

1. Unknown Unknowns Similar to the Black Swan Theory, which is a metaphor that describes an event that is unprecedented and unexpected, difficult to predict, and often inappropriately rationalized after the fact. This takes our number one spot and may be the worst apocalyptic event as it is yet to be discovered. What lurks in the vastness of space? What terrible concept have we not conceived of or yet witnessed that may still be out there? It is the unknown apocalyptic scenarios that still linger out of our reach that could be the worst humanity will ever come across.

IF YOU ENJOY THIS SITE PLEASE TELL OTHERS ABOUT US…SHARING IS CARING
Start the discussion, leave a comment below
LIKE WHAT YOU SEE ON BENDEDREALITY ? PROVE IT, MAKE A DONATION TODAY