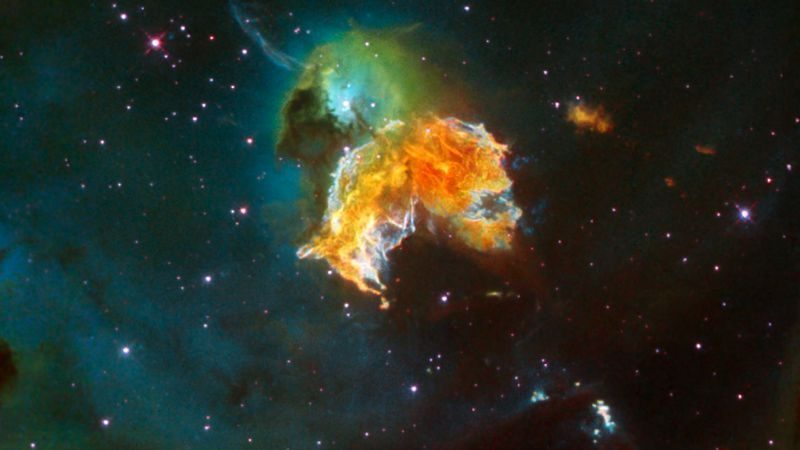 Tree Rings May Hold Clues to Impacts of Supernovas on Earth

Massive explosions of energy happening thousands of light-years from Earth may have left traces in our planet’s biology and geology, according to new research by CU Boulder geoscientist Robert Brakenridge.

The study, published this month in the International Journal of Astrobiology, probes the impacts of supernovas, some of the most violent events in the known universe. In the span of just a few months, a single one of these eruptions can release as much energy as the sun will during its entire lifetime. They’re also bright — really bright.

“We see supernovas in other galaxies all the time,” said Brakenridge, a senior research associate at the Institute of Arctic and Alpine Research (INSTAAR) at CU Boulder. “Through a telescope, a galaxy is a little misty spot. Then, all of a sudden, a star appears and may be as bright as the rest of the galaxy.”

A very nearby supernova could be capable of wiping human civilization off the face of the Earth. But even from farther away, these explosions may still take a toll, Brakenridge said, bathing our planet in dangerous radiation and damaging its protective ozone layer.

To study those possible impacts, Brakenridge searched through the planet’s tree ring records for the fingerprints of these distant, cosmic explosions. His findings suggest that relatively close supernovas could theoretically have triggered at least four disruptions to Earth’s climate over the last 40,000 years.

The results are far from conclusive, but they offer tantalizing hints that, when it comes to the stability of life on Earth, what happens in space doesn’t always stay in space.

“These are extreme events, and their potential effects seem to match tree ring records,” Brakenridge said. 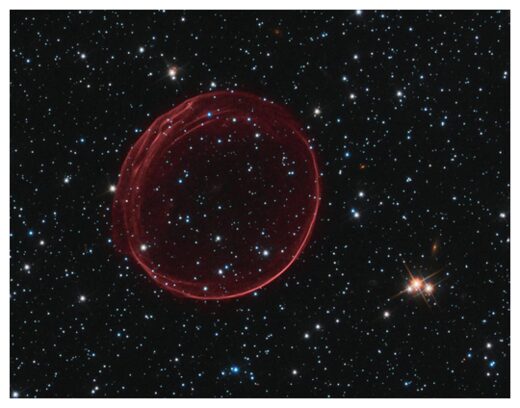 © NASA
A bubble of gas expanding at roughly 11 million miles per hour created by the shock wave from a supernova.

His research hinges on the case of a curious atom. Brakenridge explained that carbon-14, also known as radiocarbon, is a carbon isotope that occurs only in tiny amounts on Earth. It’s not from around here, either. Radiocarbon is formed when cosmic rays from space bombard our planet’s atmosphere on an almost constant basis.

“There’s generally a steady amount year after year,” Brakenridge said. “Trees pick up carbon dioxide and some of that carbon will be radiocarbon.”

Sometimes, however, the amount of radiocarbon that trees pick up isn’t steady. Scientists have discovered a handful of cases in which the concentration of this isotope inside tree rings spikes — suddenly and for no apparent earthly reason. Many scientists have hypothesized that these several-year-long spikes could be due to solar flares or huge ejections of energy from the surface of the sun.

Brakenridge and a handful of other researchers have had their eye on events much farther from home.

“We’re seeing terrestrial events that are begging for an explanation,” Brakenridge said. “There are really only two possibilities: A solar flare or a supernova. I think the supernova hypothesis has been dismissed too quickly.”

He noted that scientists have recorded supernovas in other galaxies that have produced a stupendous amount of gamma radiation — the same kind of radiation that can trigger the formation of radiocarbon atoms on Earth. While these isotopes aren’t dangerous on their own, a spike in their levels could indicate that energy from a distant supernova has traveled hundreds to thousands of light-years to our planet.

To test the hypothesis, Brakenridge turned to the past. He assembled a list of supernovas that occurred relatively close to Earth over the last 40,000 years. Scientists can study these events by observing the nebulas they left behind. He then compared the estimated ages of those galactic fireworks to the tree ring record on the ground.

He found that of the eight closest supernovas studied, all seemed to be associated with unexplained spikes in the radiocarbon record on Earth. He considers four of these to be especially promising candidates. Take the case of a former star in the Vela constellation. This celestial body, which once sat about 815 light-years from Earth, went supernova roughly 13,000 years ago. Not long after that, radiocarbon levels jumped up by nearly 3% on Earth — a staggering increase.

The findings aren’t anywhere close to a smoking gun, or star, in this case. Scientists still have trouble dating past supernovas, making the timing of the Vela explosion uncertain with a possible error of as much as 1,500 years. It’s also not clear what the impacts of such a disruption might have been for plants and animals on Earth at the time. But Brakenridge believes that the question is worth a lot more research.

“What keeps me going is when I look at the terrestrial record and I say, ‘My God, the predicted and modeled effects do appear to be there.'”

He hopes that humanity won’t have to see those effects for itself anytime soon. Some astronomers think they’ve picked up signs that Betelgeuse, a red giant star in the constellation Orion, might be on the verge of collapsing and going supernova. And it’s only 642.5 light-years from Earth, much closer than Vela.

“We can hope that’s not what’s about to happen because Betelgeuse is really close,” he said said.