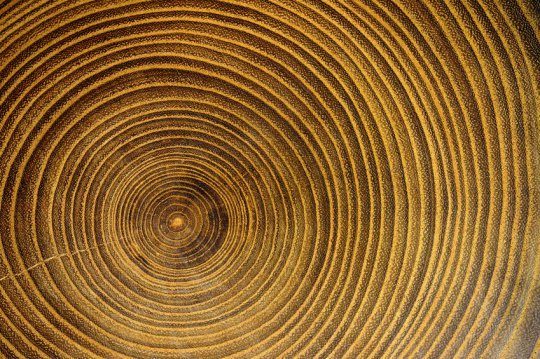 Oxford University researchers say that trees which grew during intense radiation bursts in the past have ‘time-markers’ in their tree-rings that could help archaeologists date events from thousands of years ago. In a new paper, the authors explain how harvesting such data could revolutionise the study of ancient civilisations such as the Egyptian and Mayan worlds. Until now scholars have had only vague evidence for dating when events happened during the earliest periods of civilisation, with estimates being within hundreds of years. However, the unusually high levels of the radioactive isotope carbon-14 found in tree-rings laid down during the radiation bursts could help reliably pinpoint dates. The distinct spikes act as time-markers like secret clocks contained in timber, papyri, baskets made from living plants or other organic materials, says the paper published in the Royal Society Journal Proceedings A.

Scholars believe that intense solar storms caused major bursts of radiation to strike Earth in 775 and 994AD, which resulted in distinct spikes in the concentration of radiocarbon in trees growing at that time. The events are precisely datable because the tree-rings belong to archives in which the growth year of each tree-ring is exactly known. In the new research, the authors outline how they could detect similar spikes elsewhere within the thousands of years of available tree-ring material from across the world. They say even a handful of these time-markers could allow them to piece together a reliable dating framework for important civilisations. The crucial point is that the time-markers will also be present in every living plant or tree that grew at the time of a radiation surge, including in the timber used in ancient buildings or other artefacts fashioned from the plants. The paper suggests that the existing tree-ring data are likely to reveal other radiocarbon surges in particular years. The problem, however, is that the tree-ring data is only available in blocks of decades rather than year by year. The paper proposes a cutting-edge mathematical method to filter out particular years within such a block when ‘change points’ in radiocarbon levels occurred. It also adds that it is currently unclear how regularly Earth has been hit by such intense bursts of radiation, and what the precise magnitude of the events might have been so finding new spikes will also help us understand past solar activity.

Currently, archaeologists have to rely on relatively sparse evidence for dating the history of Western civilisation before 763 BCE, with Chinese history also only widely agreed from 841 BCE. For example, they depend on ancient records of rare astronomical phenomena, such as the solar eclipse during the ninth year of Ashur Dan III of Assyria, to determine the age of historical events. In the absence of such records, standard radiocarbon measurements provide the best estimates, but these are still often only accurate to within 200 to 300 calendar years. If the radiocarbon spikes in the tree-ring data were also found in archaeological items attributable to specific historical periods, the information could be used to anchor exactly when events occurred, says the paper.

Lead author Dr Michael Dee, from the School of Archaeology at the University of Oxford, said: ‘Variations in atmospheric radiocarbon concentration are largely the result of carbon dioxide emissions from activity from volcanoes and the ocean, but they are also influenced by changes in solar activity. The spikes in 775 and 994AD were almost vertical and of comparable magnitude all around Earth. Such markers can be easily identified in known-age tree-rings and are fixed in time. In the past, we have had floating estimates of when things may have happened, but these secret clocks could reset chronologies concerning important world civilisations with the potential to date events that happened many thousands of years ago to the exact year.’