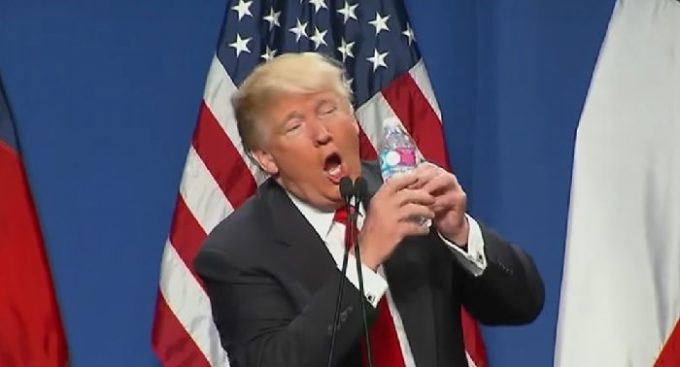 MSNBC talk show star Joe Scarborough claimed on Thursday that he was told by sources close to US President Donald Trump during his campaign that the candidate was suffering from the “early stages of dementia.”

Scarborough, a former representative from Florida who has hosted the popular MSNBC program “Morning Joe” since 2007, said that “people close” to the president told him Trump is “mentally unfit” and “completely detached from reality.”

Along with co-host Mika Brzezinski, Scarborough called on Trump’s cabinet, including Vice President Mike Pence, to remove the “unfit” Trump from the White House. “Everybody around Donald Trump knows he’s not stable. Everybody,” he said.

“When are we supposed to say this? After the first nuclear missile goes?” asked a visibly upset Scarborough. “Is that when it’s proper to bring this up in polite society? When is it the right time to talk about a mentally unstable president in the White House in a nuclear showdown with another unstable madman in North Korea?”

Korea was invoked again later in the show, when Scarborough claimed that the US was much closer to military action against Pyongyang than most people thought. “We heard this months ago, that we are going to have a ground war in Korea, they believe that inside the White House for a very long time.”

Scarborough invoked the 25th Amendment to the US Constitution, which details the line of succession in the case of a vacancy in the office of the president or vice president. Section 4 of the amendment is that if the vice president and other government officials believe the president to be “unable to discharge the powers and duties of his office,” then the vice president immediately replaces him as acting president — possibly for good.

Section 4 has never been invoked in the 50 years since its ratification, but Scarborough argued that its time has come. “If this is not what the 25th Amendment was drafted for…” Scarborough began.

“…Then what was it drafted for?” asked Brzezinski.

Scarborough’s comments come just one day after Trump made a tweet referencing him — specifically, the bizarre death of one of his interns while he was still a congressman in 2001. Lori Klausutis died at the age of 28 in an incident that police called a result of a pre-existing heart condition that caused her to collapse, hitting her head on Scarborough’s desk. The incident has been the subject of numerous conspiracy theories, most of them involving Scarborough ordering Klausutis murdered.

“So now that Matt Lauer is gone when will the Fake News practitioners at NBC be terminating the contract of Phil Griffin? And will they terminate low ratings Joe Scarborough based on the “unsolved mystery” that took place in Florida years ago? Investigate!” Trump tweeted on Wednesday.

So now that Matt Lauer is gone when will the Fake News practitioners at NBC be terminating the contract of Phil Griffin? And will they terminate low ratings Joe Scarborough based on the “unsolved mystery” that took place in Florida years ago? Investigate!

While Scarborough and Trump were friendly in the early days of the latter’s presidential campaign, relations soon soured. In August 2016, Scarborough penned an editorial in the Washington Post, calling for the Republican party to refuse to accept Trump as their candidate. Trump replied by nicknaming him “Psycho Joe” and accused the show of being “unwatchable,” with sagging ratings.