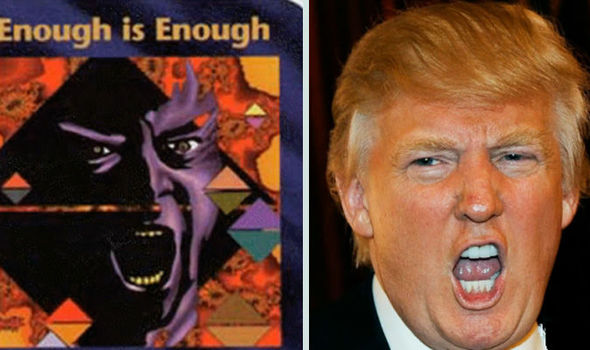 Illuminati: The Game of Conspiracy was released in 1995, and is said to have predicted 9/11 and Princess Diana’s death.

Now, conspiracy theorists, who believe the game’s creator Steve Jackson foretold world events with the cards, claim one of them warns of Mr Trump’s assassination at the hands of the Illuminati.

The Illuminati conspiracy theory revolves around an alleged secret society that actually runs all global governments from behind the scenes and is slowly implementing a so-called New World order (NWO), that will culminate in a global leadership.

The theory varies in extremities, including the Illuminati being a highly Satanic cult that intends returning the devil to Earth.

The card (left) is said to show the face Donald Trump pulls in the 2011 image (right). 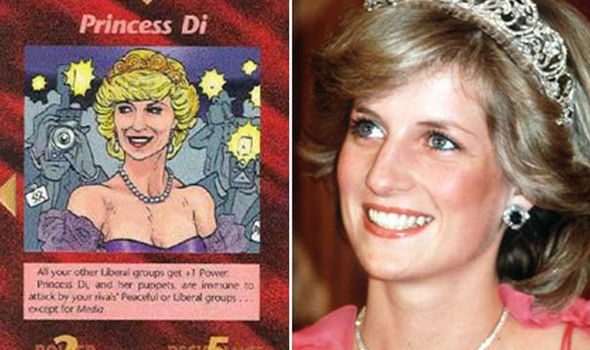 The Princess Di card from the same Illuminati game.

Some claim he is a senior member, while others claim he is a maverick outsider who has outraged them by making it into the White House.

Either way, according to the cards, the Illuminati is going to despatch of him.

The card, titled Enough is Enough, is thought to hold an image similar to an angry-looking Trump, 70, which was taken in 2011.

The card reads: “At any time, at any place, our snipers can drop you…have a nice day.”

Many conspiracy theorists see this as a direct reference to an assassination threat to Mr Trump.

During the election campaign there was an alleged assassination attempt against the billionaire businessman.

British citizen Michael Sandford, 21, was jailed for 12 months in December after he tried to grab a policeman’s gun at one of Mr Trump’s rallies at Treasure Island Casino in Las Vegas on June 18.

Sandford, who has autism, admitted charges of being an illegal alien in possession of a firearm and disrupting an official function.

Released as a challenging role playing pursuit for people aged 12 and above, players take the role of a secret society and draw cards as they plot world domination.

All this seems fairly innocent, until you consider the predictions the cards make.

On that attack two passenger jets smashed into the Twin Towers.

The card depicts fire ripping through one of two buildings, with the suggestion that it will collapse.