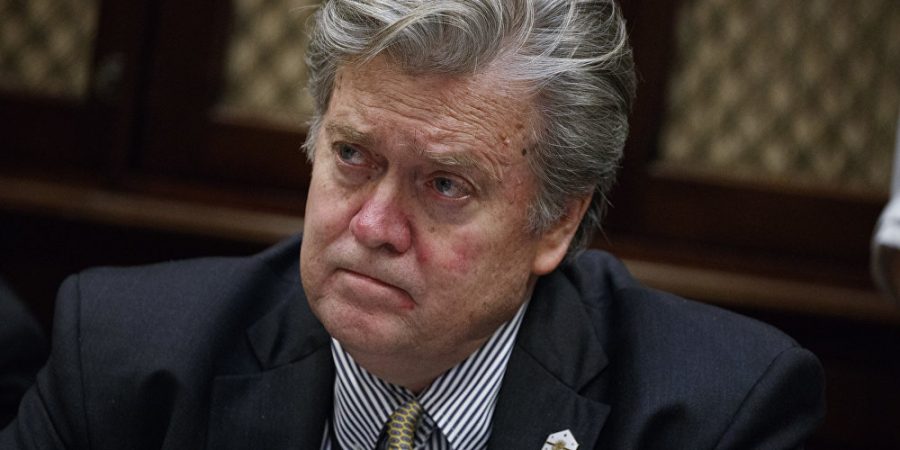 During an interview with CBS 60 Minutes that aired on Sunday Bannon was asked if he had previously called Comey’s firing “the biggest mistake in political history.”

“That probably would be too bombastic even for me, but maybe modern political history,” replied Bannon in his first television interview since leaving the White House in August.

“I don’t think there’s any doubt that if James Comey had not been fired, we would not have a special counsel, yes,” Bannon said, referring to the US Department of Justice appointing former FBI Director Robert Mueller to investigate alleged ties between the Trump administration and campaign and Russian actors, among other charges.

“We would not have the Mueller investigation and the breadth that clearly Mr. Mueller is going for,” Bannon said. Mueller has formed a team of sixteen lawyers and impaneled a grand jury to investigate a June 2016 meeting between Trump campaign officials and Russian nationals accused of having ties to Moscow.

Bannon also called Mueller’s investigation a “total and complete farce” as well as a “waste of time.”

After Bannon departed the White House in August, he said on Breitbart’s website that he would be “going to war for Trump.” Despite having accused Trump of making “modern political history’s” biggest blunder, Bannon told 60 Minutes that his purpose was still to “support Donald Trump,” adding that he intends to remain Trump’s “wingman outside for the entire time” Trump is president.

Dr. Binoy Kampmark, a geopolitical analyst and a Senior Lecturer in the School of Global, Urban and Social Studies at RMIT University in Australia, was asked by Sputnik Radio if he saw Bannon’s comments as Bannon turning on his former boss and benefactor. “Bannon always speaks of being loyal [to Trump,]” Kampark replied. “But the reality of it is was that he saw Trump as a manifestation of a broader instance in history. He didn’t necessarily see Trump as ideal in a sense. Trump not being ideological doesn’t really square many of his views with Bannon, who is very much ideological.”

“They were never really that close to begin with. It was convenient but you don’t really think it’s the sort of thing that can last for very long beyond a certain point.”

Bannon also said that Gary Cohn, the former CEO of Goldman Sachs who was then appointed to Trump’s chief economic advisor, should have resigned after publicly disagreeing with President Trump’s comments on the racially-charged protests in Charlottesville, Virginia in August that left a woman dead and 19 other people injured.

“Absolutely,” Bannon said when asked if Cohn should have resigned. “If you don’t like what he’s doing and you don’t agree with it, you have an obligation to resign.”

Cohn, who is Jewish, said he felt “compelled to voice my distress over the events of the last two weeks” and that Trump was wrong to say there were “very fine people on both sides” during the Charlottesville protests.

“Citizens standing up for equality and freedom can never be equated with white supremacists, neo-Nazis and the KKK,” Cohn told the Financial Times in August.

Cohn and Bannon were noted rivals in the White House, with Cohn being a leader of a “globalist” faction of Trump advisors — Axios reported that Bannon’s nickname for Cohn was “Globalist Gary” — and Bannon the most prominent “nationalist.”

Bannon left the White House in mid-August in what White House Press Secretary Sarah Huckabee Sanders called a “mutual agreement” between Bannon and White House Chief of Staff John F. Kelly. Anonymous sources told outlets such as CNN and the Washington Post that Bannon was given a choice between resigning or being fired by Kelly and Trump.

Bannon himself contradicted the president at that point as well, when he publicly disagreed with Trump’s threat to bring “fire and fury” against North Korea if they continued to threaten the US and its allies.