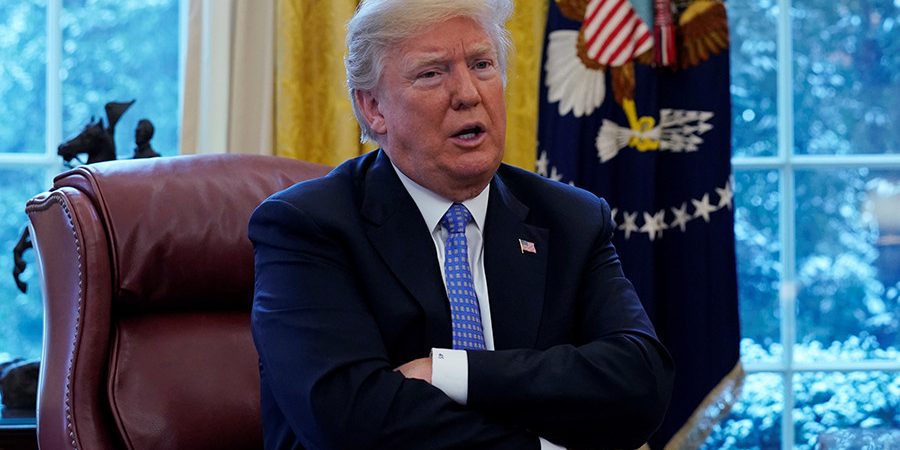 It’s “very possible” the standoff with North Korea might not be resolved peacefully, Donald Trump has said in an exclusive interview with Reuters, and he’s not sure if the inter-Korean dialogue will lead to “anything meaningful.”

“I’d sit down, but I‘m not sure that sitting down will solve the problem,” Trump said.

“I am not sure that talks will lead to anything meaningful” since they have been going on for 25 years now.

The remarks come after Trump’s statement earlier in January, in which he said he is “absolutely” willing to talk on the phone to North Korean leader Kim Jong-un if certain conditions are met.

Tensions with Pyongyang have escalated dramatically since Trump came to power in January last year, with many threats, incendiary rhetoric and provocative military maneuvers characterizing the abrasive exchanges between the two nuclear-armed leaders.

During the interview, the US president also had harsh words for Russia with regards to the situation on the Korean peninsula. Trump accused Moscow of being soft on Pyongyang and not doing enough to implement the UN agreed sanctions.

While supporting the UN Security Council sanctions on North Korea, Moscow has repeatedly advised that the US should take a more moderate approach towards Pyongyang and follow a diplomatic route.

Trump and Kim have repeatedly threatened one another with a nuclear strike, with the US commander in chief once tweeting that his nuclear button was “much bigger & more powerful one than his [Kim’s], and my Button works!”

Speaking from the Oval Office, Trump told Reuters that he is still not ruling out military action. “We’re playing a very, very hard game of poker and you don’t want to reveal your hand,” he said.

Russia’s foreign ministry has meanwhile criticized the joint US-Canadian organized summit trying to resolve the the N.Korean quandry. Moscow said the nations present in Vancouver failed to provide any alternatives to the joint Russian-Chinese “double-freeze” strategy, in which Pyongyang and the US respectively cease their missile program and military maneuvers. Neither Russia nor China were invited to the summit, where Washington again rejected the so-called double-freeze proposal.

“Regime change war policy is the reason why North Korea sees nuclear weapons as their only deterrent from a US-led attack,” she tweeted. “Kim Jong-un sees what the US has done to Gaddafi in Libya, Saddam Hussein in Iraq, and the effort underway to decertify the nuclear deal with Iran,” the Democratic representative from Hawaii said.