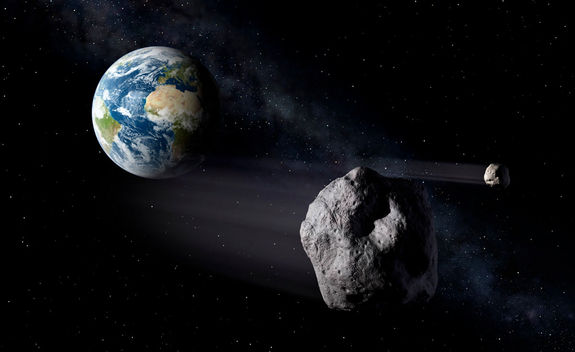 Two large asteroids will make extremely close passes of Earth over the next couple of days.

While a number of asteroids – classed as Near Earth Objects (NEOs) – pass the Earth on a regular basis, these two will make an exceptionally close flyby.

“This object is about the same size as Chelyabinsk asteroid of February 15, 2013. A larger asteroid, it was first observed at Pan-STARRS, Haleakala observatory in Hawaii on June 29 and its estimated diameter is between 17m and 38m (55 – 124 feet). Its closest approach to Earth is expected at 07:20 UTC on July 9 at a speed (relative to the Earth) of 7.17km/s,” SAAO Science Engagement Astronomer Dr Daniel Cunnama told News24.

This asteroid is estimated to be 22m long – around half the length of an Airbus A380-800 – the biggest passenger plane in the world.

NASA Jet Propulsion Laboratory data revealed that 2019 NN3 will pass Earth on Wednesday at a distance of just 320 000km. That asteroid is estimated to be between 35m to 77m in length.

Finding asteroids is difficult because they travel fast against the blackness of space, making it difficult for instruments to detect.

“Both asteroids belong to the Amor group of asteroids,” said Cunnama.

Other classifications include Apollo NEOs which cross the Earth’s orbit, but with a semi-major axis larger than the Earth’s, and Atiras orbit between the Earth and the Sun.

Scientists have discovered about 20 000 NEOs since 1898 though not all of them can be classified as potentially hazardous to Earth.

The instrument is funded by the National Aeronautics and Space Administration (NASA) and costs $3.8m.

A South African team is actively involved in the search for potentially hazardous NEOs.

“We currently have a small team of just a few astronomers focused on asteroids but we expect this to grow when we get our own Atlas telescope in the next two years,” said Cunnama.