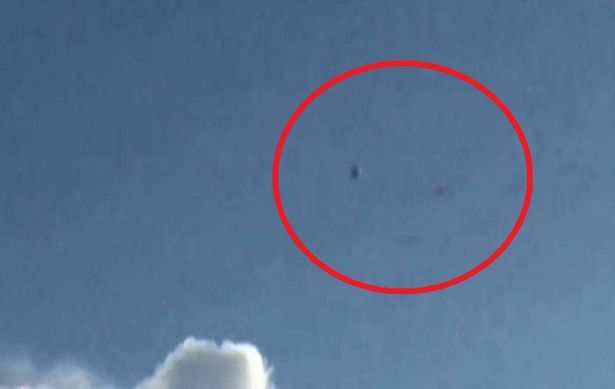 ‘I have always had an open mind and was so pleased to have captured these two objects, whatever they are’

A Cornish man has accidentally caught on film two suspected UFOs that are leaving experts intrigued.

Alan Kingwell, from Liskeard, was not expecting to find two strange flying objects in the sky when he looked at the timelapse video he shot from his garden.

The self-employed artist was having dinner outside when he saw how dramatic the sky was and decided to do a timelapse film of the clouds.

It is only when the 62-year-old decided to edit the film that he noticed something odd.

*NOTE: Footage of the UFO’s becomes more clean and clear around the #:15 mark.

“It was filmed accidentally and I never saw the objects until I edited the timelapse film,” Alan said. “I immediately tried lots of things to dismiss camera error or any other natural things that may have caused this.”

He said that he assumed at first that it was something on the lens or a fault with a camera.

“I spend many hours looking at the tiny clip and I am convinced now that there really was something totally motionless high in the sky,” he added.

The video shows two dark shapes “flying” motionlessly in the blue sky and sometimes being covered by clouds.

Alan said: “There is a part of the clip where you can see the two objects being covered by cloud and peeping through again to be covered once more before they are revealed again when the cloud disperses.”

After the discovery, the artist went back out armed with binoculars and a better camera but the clouds had become thicker.

“I spotted something through the binoculars for a few seconds before the clouds covered it,” he said.

“I immediately phoned my good lady to come out and see but the cloud covered the sky completely and it was like that all evening.

“Such a shame because I think these two objects were still there at that time which by then would have been around 6.15pm but the cloud cover was too much.”

Alan went back out at dawn the next morning to study the sky with binoculars but there was nothing there.

“I have been looking at the sky ever since,” he said. “I have always had an open mind and been fascinated with things like this and was so pleased to have captured these two objects, whatever they are.

“I have also sent the clip in to various societies who were studying this kind of thing and they are very intrigued.”

Alan is now appealing for witnesses and asked if anyone else in Cornwall saw something strange in the sky on August 30, around 5 to 6pm. You can get in touch here.