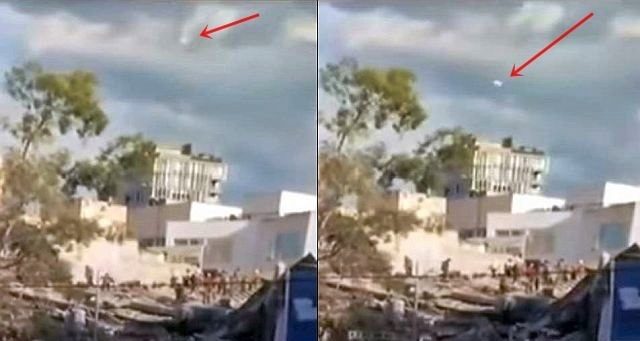 A powerful 7.1 earthquake struck the state of Puebla, about 80 miles southeast of Mexico City this morning. Mexico’s National Civil Defense agency put the death toll at over 200, so far. In populated parts of Mexico City dozens of building collapsed or were heavy damaged.

During a live TV broadcast suddenly a UFO coming out of the clouds, then the object stops and moves again. While it could be a drone that takes a look at the aftermath of the earthquake the object does not look like a drone.

It is not the first time UFO’s have been seen before, during or after an earthquake occurred.

IF YOU WISH TO GO DIRECTLY TO THE PART WITH THE ‘UFO’ APPEARING, FORWARD TO AROUND THE 26 SECOND MARK