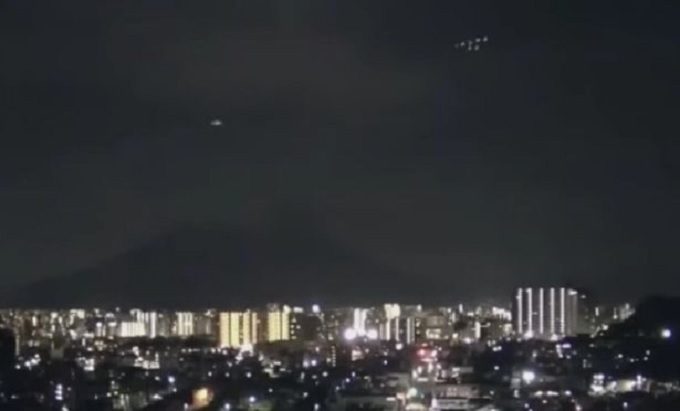 ‘UFO’ ‘Followed Through Sky’ by Mysterious Orbs in Japan

Footage of an alleged “UFO” cruising through the skies near a volcano in Japan has sent conspiracy theorists wild, with some claiming it is being chased by smaller craft.

In the clip, recorded at Kagoshima City in Japan, a large bright object appears in the night sky above the urban area, with the silhouette of Sakurajima volcano behind.

As the shiny object zips from the right of the frame to the left, a group of smaller-looking lights that appear to be flying in a triangle formation appear and follow in its wake.

The footage was spotted by Chris M who sent it to the popular YouTube conspiracy theory channel The Hidden Underbelly 2.0 where it had since been viewed more than 1,000 times.

In the caption, he explained: “These objects were seen by the viewers of this live stream that is set up to monitor the Sakurajima volcano.”

Unsurprisingly, the clip drew an enthusiastic debate about whether the lights were UFOs or not.

“That’s a fantastic capture, definitely one large one and then a smaller group following,” commented one believer.

A second conspiracy theorist said: “Mother ship trying to fly away from her baby ships. In all seriousness though, it was very good footage”.

“There’s always UFO activity near volcanos, like the one in Mexico,” wrote another fan.

A fourth viewer, speculating that it might be advanced technology, commented: “The concept that comes to mind when I see these clusters that change back to a singular light or appear to stutter is maybe they move at a frequency that is not native to our perception.

“Certainly wouldn’t blow my mind If that were the case.”

More cynical viewers claimed the footage was simply “drones” or perhaps a “reflection”.

This comes after a strange “metallic” object was spotted on the International Space Station (ISS) live feed, sparking a frenzy of conspiracy theories.