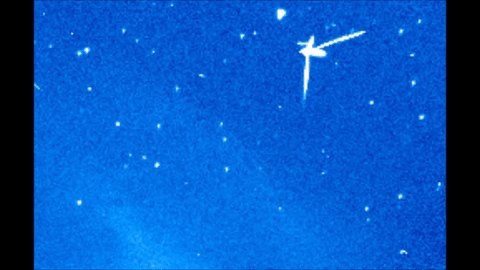 Alien enthusiasts once again blast NASA for what they view as an attempt by the space agency to cover up the proliferation of living space ships that are garnering their energy from the sun to multiply.

Cameras on board the Solar and Heliospheric Observatory (SOHO) captured an image that alien enthusiasts believe is a gigantic four-armed UFO beaming around the sun in order to capture energy from the colossal star, a theory which has left NASA uncomfortable after the image was spotted in 2011, 2012 and 2016.

The aerospace organization refuses to comment on what the image is suggesting that it may simply be an irregularity in the image or a heaping load of space junk that has caught the fancy of alien enthusiasts, but the four-armed illuminated flying object has been repeatedly captured by SOHO cameras with similar images captured several different times over the past five years. 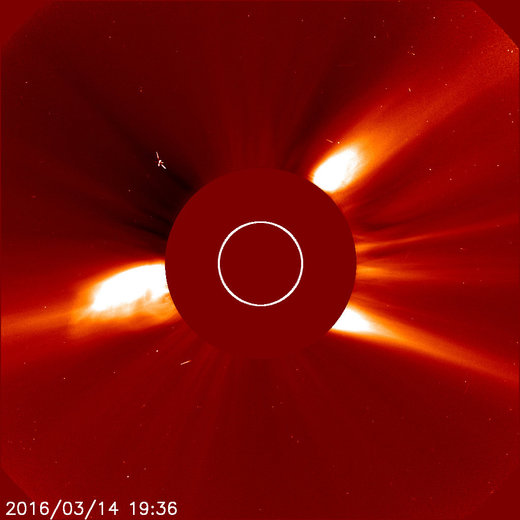 The SOHO satellite, managed by NASA and the European Space Agency (ESA), hovers in the orbit around L-1 transmitting to Earth real-time data about solar activity in order to enable researchers to predict space weather – such as meteor showers or other disturbances that could influence the world’s satellite systems. The mysterious UFO captured by the SOHO camera was posted on YouTube earlier this week by UFO hunter StreetCap1 who questions “why has NASA continually released these photos without any explanation of these anomalies?”

Well-known alien enthusiast Scott C. Waring said of the footage that “[The image] shows three long appendages protruding from a main object. It also shows a fourth arm…. That is more than two time long as the higher arms. All four arms are solid objects, not trails.”

UFO hunters who have debated the footage believe that the image is of a living alien space ship that is entering the sun’s orbit to capture energy by “sucking” power from the star in order to capture the strength needed to multiply.

The theory is reminiscent former NASA scientist Norman Bergrun’s “ringmaker” theory in which he argues that alien spaceships are nursing from Saturn’s rings in order to capture the energy needed to “proliferate.”

Many people believe that UFOs and space aliens are a conspiracy theory propagated by disturbed individuals while others think that there is a universe filled with mystery and that the truth is ultimately out there.