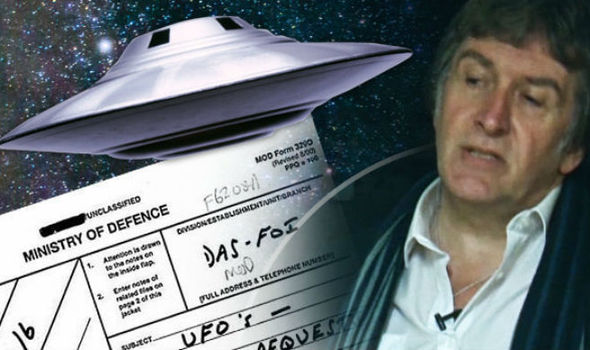 THE British government is involved in a cover up over the truth about aliens and UFOs, a paranormal investigator has shockingly claimed.

Intelligence that could shed light on the most notorious British unsolved UFO mysteries, including the Rendlesham case from 1980, has been withheld from public view, according to UFO expert Malcolm Robinson.

Mr Robinson, founder of Strange Phenomena Investigations, has collated UFO evidence for years and in 2015 presented a dossier to Downing Street, asking then Prime Minister David Cameron to open an inquiry – something that failed to materialise.

He said: “The governments of this world – including Britain – know far more than they are letting on, that’s for sure.”

He claimed that a tip off off from a source within the Ministry of Defence suggested that many sightings and files had been covered up.

He claims the manager of the now defunct UFO desk, Nick Pope once told him: “We don’t even tell you the half of it.”

The UFO department and hotline was shut in 2009 because it no longer served a “defence purpose” and was taking staff away from “more valuable defence-related activities,” documents obtained under Freedom of Information later revealed.

Now declassified documents stated: “The Ministry of Defence has no opinion on the existence or otherwise of extra-terrestrial life.”

It also added that, in 50 years, no UFO report had revealed evidence of a potential threat to the UK.

Eight years since the department was culled, Mr Robinson has called for government to launch an inquiry into clusters of sightings, including cold case police files from Bonnybridge, Scotland – a case he has focussed on.

There were more than 300 UFO sightings in the small town in the 1990s.

Mr Robinson said: “The Ministry of Defence have slowly released governmental files about sightings in the UK.

“Declassified documents in the US have also been released which clearly show that the NSA were in cahoots with other nation’s governments – and knew exactly what was going on.

“With any given sighting, we check with airports, with the National Security Agency, with the Ministry of Defence and meteorological stations to try and find a rational explanation.

“Some five percent can’t be explained.”

Earlier this year Express.co.uk revealed that MoD UFO files which had been sent to the National Archives for public release had been sent back for further censorship.

This led to claims a cover up was underway.