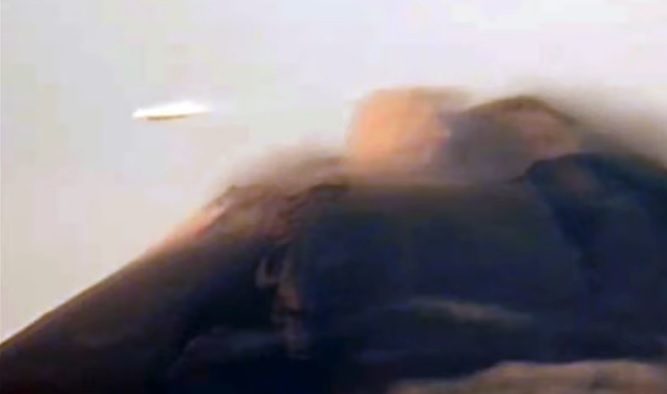 UFO Seen Near to Popocatepetl Volcano in Mexico

The UFO hunter argued that no one on Earth would risk flying an aircraft that close to a volcano’s mouth, not to mention that the object he saw allegedly uses some kind of alien cloaking technology.

Prolific hunter of elusive alien spacecraft Scott C. Waring, who previously reported findings such as the “Mona Lisa of Mars” and an alleged underwater alien base, has come up with yet another bold claim, insisting that he detected “an unknown object flying through the plume of smoke” over the Popocatepetl volcano in Mexico.

As Waring explained in his blog ET Data Base, he made this discovery while watching a live volcano cam when he spotted the object in question, which has “no wings, tail or contrail,” and which looked like a white disk “with a dark hump at its lower center.”

“There are no identifying marks on the craft. Also the second cam in the upper left corner caught nothing at all. It was invisible to that cam!” he wrote. “That sound like the cloaking technology of aliens to me. So I’m calling this a real UFO.”

Waring also expressed doubt about anyone willing to risk flying an aircraft this close to the volcano’s mouth, adding that the object is apparently about 200m long.

The conspiracy theorist has previously made a number of claims related to various peculiar objects he allegedly found in NASA photos, but the US space agency attributed at least one of his discoveries to the effect of pareidolia – a psychological phenomenon where people see recognisable shapes in clouds, rock formations, or otherwise unrelated objects or data.