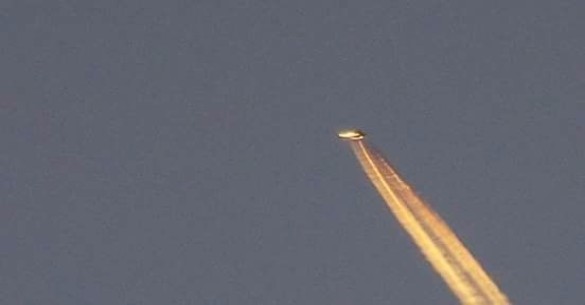 Devon county in England has been a hotbed of UFO activity. The sighting a few days ago only lends more fuel to the fire. Why do the people who live in Devon see so many strange objects in the sky?

Ever since the 12th century, when religious pilgrims reported seeing a glowing dragon emerge from the sea and disappear into the sky, the entire southwest of England has had many a strange sighting. The most recent sighting occurred only a few days ago, when Mark Emmins, a musician, spotted the object over the town of Exmouth. He wrote on his Facebook page,

It stood still in the sky for some hours and then decided to move and then vanish. We got photos too.
The photographs were taken by Tyron Osborne, a friend of Emmins. They noted that the object hovered for several hours until it eventually moved eastward out of sight.

In July of 2016, John Mooner spotted a strange orange object hovering over his town of Newton Abbot. He grabbed his Nikon camera, and snapped several images. John Mooner stated in an interview with The Plymouth Herald,

The object was definitely not any type of known aircraft. The object was glowing bright orange and had a white pulsing light on the top left side. The object was large and just hung there silently over the housing estate it gave me the creeps. 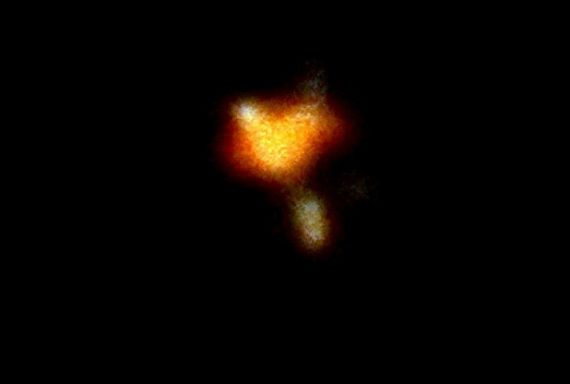 In September of 2016, residents in Exmouth witnessed two triangular objects being chased by a helicopter. Multiple witnesses came forward with the same story. One of the witnesses, a serving soldier, told reporters,

I believe I have seen the same thing. On hearing the sound of a helicopter I looked out to see if it was another police chopper. I am a serving soldier and I can say I’ve never seen anything move in the way these objects were.

Perhaps one of the most famous cases out of the Devon area occurred in 1967. Known as the Devon Flying Cross UFO, the case made headlines around the globe. Two police constables Roger Willey and Clifford Waycott, chased a strange cross shaped UFO in their police car in the early hours of October 24th. Constable Willey told the press at the time,

It was travelling about tree-top height over wooded countryside near Holsworthy, Devon. We drove towards it and it moved away. It then led us on a chase as if it was playing a game with us. 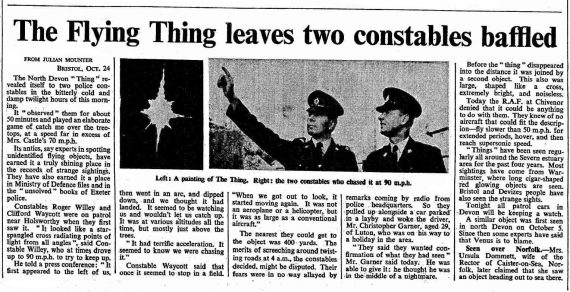 The Flying Cross Incident led to multiple other sightings of a similar object throughout Devon during that year. In fact, the year of 1967 was a major UFO flap year, with UFO sightings occurring all over the planet. A few interesting cases of that year are the Shag Harbour UFO Crash, the Falcon Lake UFO Encounter, and the Malmstrom Air Force Base UFO Incident.

Whether these strange objects are drawn to the area, or there is simply something wrong with the drinking water, Devon is definitely well known for its history with UFOs. If you are ever near the area, it’s best to look up once in awhile. You may just catch of glimpse of something odd.