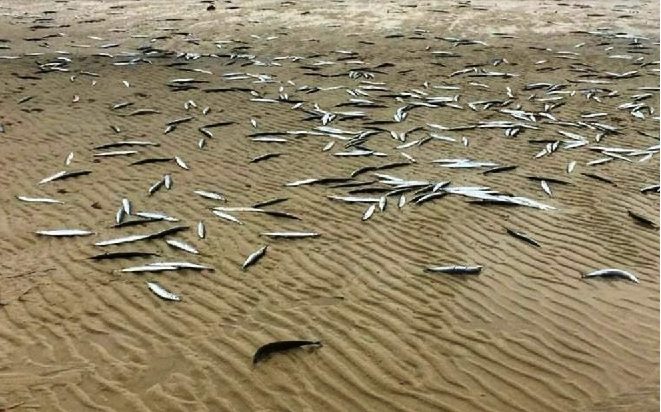 Sometimes the news is nothing other than depressing. There have been several high-profile and unexplained animal die-offs earlier this year including the fateful mass deaths of the scrotum frogs of Lake Titicaca and the mysterious incident in Boston where dead birds rained down upon city streets. Now, several more mass animal deaths around the world have ecologists and environmentalists scratching their heads in despair and desperation over what could be behind these deadly events.

“They were probably chased onshore by larger fish. They are pretty temperature sensitive and they were probably trapped last week when it got cold [last] Wednesday night. The next morning when we got in we were getting a lot of phone calls. Things are active out there now. We’ve had dolphins strand over the last couple of weeks.”

Let’s hope he’s right. To add mystery to this event, however, similar fish die-offs have been reported in Mexico. Mexican news outlet La Unión has reported that thousands of fish have been found dead near the El Gigante dam in Ayala, Mexico, prompting a local health scare. Officials have yet to find a cause for the death of the fish.

A little farther south, thousands of dead birds have been found along the coast of the Araucanía Region of central Chile. The mayor of nearby village Toltén, Chile has asked residents to remain calm until the birds are buried and an official explanation can be found.

On the other side of the world, over 300 dead seals were found along a 30 kilometer (18 mile) stretch of the Caspian Sea. Many have the seals are reported to be heavily mutilated, leading some to speculate that Russian underwater military testing might be afoot. Me, I’m going with sea monster.

Poaching is not suspected in the deaths of the 317 seals along the Caspian Sea.

Whatever the cause of these mysterious deaths might be, one thing is clear: it’s been a bad week to be a member of the animal kingdom.