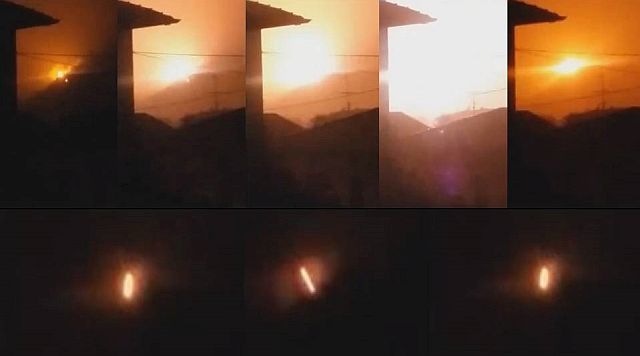 On July 14, 2017 around 1.30AM during severe storms Patrizia Lapatty saw something strange in the sky over Bergamo in Italy on which she began to film the strange phenomenon.

Wondering what the phenomenon could have been she decided to send the footage to EUStormMap asking for an explanation on which they gave the following statement:

“For us this is one of the most fascinating types of lightning, beyond rare, it’s so rare that many people disbelieve. We receive only 1-2 reports per year in Europe and this is the 2nd one we have seen in 2017.”

“Immediately after the strong pulsing glow came a very strong smell of sulphur, a common trait with ball lightning reports.”

“No sign of fire the following morning and this occurred some 2-3 meters above the tree tops on a hillside in front of the observers home.”

Thus, according to EUStormMap it was ball lightning and it happened 2-3 meters above the tree tops on a hillside.

At all, in my opinion their statement is very vague and I think more investigation is needed before claiming it is ball lightning.

If you look at the video it seems that the ball of lightning is much further away then right 2-3 meters above the tree tops.

If you listen to the video then you not hear an explosion. Instead of exploding the anomaly gave a strong pulse, before fading away.

If it did not explode how then you can smell sulphur? Besides, is it possible that Patrizia can smell the sulphur, given the distance from her location to the hillside?

Here is the fascinating video of the ball of fire in the sky over Bergamo and decide for yourself what it might have been.