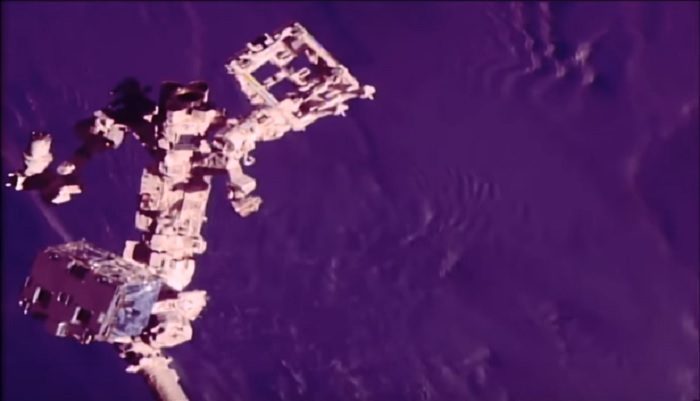 NASA’s International Space Station (ISS) live camera captured on Friday what appears to be a 900-foot Triangular UFO in the background.

The unidentified object first pops up as three twinkling lights in a triangular shape then seemingly morphs into an orb-like object before slowly fading away.

YouTube Channel kingwilly200 shared the video on their channel, have a look below and see what you think:

*you can watch from the beginning or if you want to skip ahead to where the action starts, skip forward to around the 55 second mark.

The Hidden Underbelly 2.0 YouTube Channel also shared the video and has some zoomed in edit to try and see what this object could have been.

“This UFO appeared on live cam and spit out an orb that quickly came closer to the space station. As the orb left the main ship, it was visible. However its systems seem to become activated after it left, because it soon cloaked. ”

It might be interesting to note that a Facebook user (Sarah Adams), posted a sighting of ‘Phoenix like’ lights that appeared in the night sky over Baja, Mexico on April 12, 2018. Could this be the same object we see captured by NASA’s ISS cam?