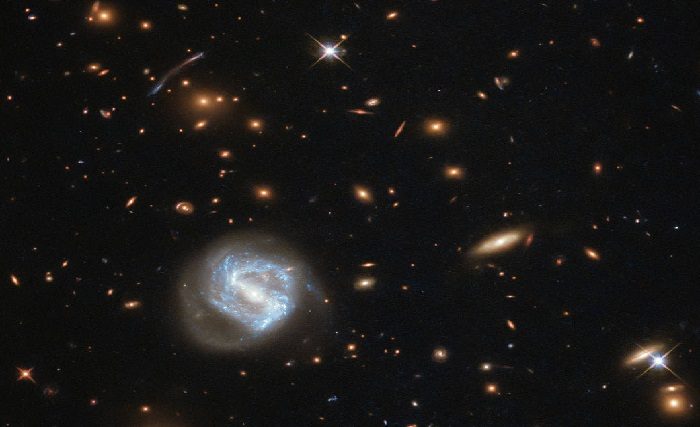 “The process could happen “remarkably” quickly, the authors claim…”

Researchers discovered the accelerated expansion of the universe in 1998, as two independent projects, the Supernova Cosmology Project and the High-Z Supernova Search Team, used distant supernovae – stellar explosions briefly shining as brightly as 10 billion suns – to measure the process.

The expansion of the universe, first discovered back in 1998 to be speeding up, driven by dark energy exerting repulsive pressure, rather like the opposite of gravity, could soon grind to a standstill, according to new research.

Furthermore, the universe could then begin to shrink, prompting stars, galaxies, and planets to collide. Eventually, the cosmos could collapse upon itself in a “Big Crunch”, revealed the study, published in the journal Proceedings of the National Academy of Sciences.

The process could happen “remarkably” quickly, the authors claim, with the universe ending its acceleration within the next 65 million years. After that, within 100 million years, its leisurely contraction could result in the “death” of time and space, or “rebirth” in a new Big Bang.

“Going back in time 65 million years, that’s when the Chicxulub asteroid hit the Earth and eliminated the dinosaurs… On a cosmic scale, 65 million years is remarkably short”, study co-author Paul Steinhardt, director of the Princeton Center for Theoretical Science at Princeton University in New Jersey, was quoted as saying by Live Science.

Making use of past observations of cosmic expansion, in their study, Steinhardt and his colleagues, Anna Ijjas of New York University and Cosmin Andrei of Princeton, modelled how the properties of quintessence – a hypothetical form of dark energy – could change over the next several billion years.

According to some physicists, quintessence is believed to be either attractive or repulsive, depending on its ratio of kinetic and potential energy. Those espousing this theory believe that quintessence became repulsive approximately 10 billion years ago, about 3.5 billion years after the Big Bang.

In the Princeton University team’s model, dark energy can decay over time, causing the expansion of the universe it has been accelerating for billions of years to weaken.

Dark energy has been hypothesised to account for the observational properties of distant Type 1A supernovae, which showed the universe was experiencing an accelerated period of expansion. This revolutionary discovery came about in 1998 during a survey of Type 1A supernovae. These are massive explosions of dying giant stars, whose output of bright light is used by astronomers to calculate distances in the cosmos.

The 1998 survey was carried out by two international groups of astronomers, including Americans Adam Riess and Saul Perlmutter, and Brian Schmidt in Australia, who used eight telescopes worldwide. The research aimed to use the distance of Type 1A supernovae to calculate the expansion rate of the universe, known as the Hubble Constant.

The results showed that supernovae which exploded when the universe was only 2/3 of its current age were fainter than they should have been and, accordingly, much further away.

The resulting implication was that the universe had expanded faster than it should have done, with the force responsible dubbed dark energy by scientists.

Dark energy is now thought to make up 68 percent of everything in the universe, with normal, or “baryonic” matter, comprising a mere 5 percent. The rest consists of dark matter – also an unsolved cosmic mystery.

Neither dark matter nor dark energy can be directly observed. Their presence is “inferred” from observations of gravitational interactions between astronomical objects.

According to Paul Steinhardt, there is no way to test whether dark energy – quintessence – is real, or whether the cosmic expansion has, indeed, started to slow down.
All that remains for scientists, he believes, is to fit the theory with past observations.