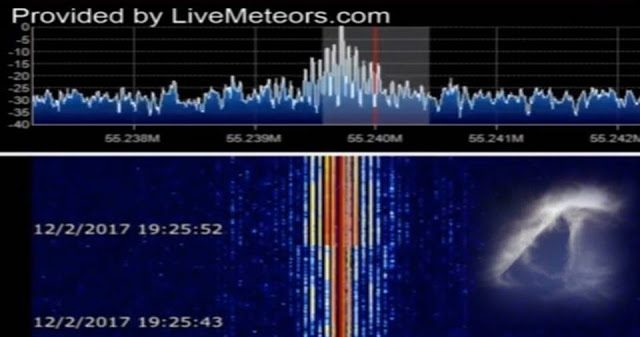 This is very strange indeed. If a massive object did either enter or pass through our planets atmosphere, where is it now? (cloaked UFO mothership??)

Just a brief explanation of the video that shows the signal so it can make sense for those that might not be familiar with what the radio signature of ‘regular’ or ‘normal’ incoming meteors/space objects would sound/look like. For those that don’t know……the site the video is is showing you, is a site that uses radio receivers to pick radio signals put out by incoming meteors/meteorites. Usually they only cause momentary “noise”. As long as they travel through the atmosphere, so it’s usually only a short burst. So, the issue is, they never last this long as the one in this video.

Is something big going through our atmosphere? On December 2, 2017 the meteor detector at LiveMeteors detected a weird unusual radar return on the tracker.

The meteor tracker doesn’t detect objects, it detects ionizations which may or may not be from an object. A normal viewing would be some dots and you hear some beeps, but on December 2, it gave a huge radar return and a large burst of sound which lasted for about 2 minutes.

The meteor tracker doesn’t detect objects, it detects ionizations which may or may not be from an object. A normal viewing would be some dots and you hear some beeps, but on December 2, it gave a huge radar return and a large burst of sound which lasted for about 2 minutes.

While some people wonder if it was glitch or maybe there was something near one of the antennas emitting the signal, others are convinced, given that the signal lasted about two minutes, that something big from outer space has entered our upper atmosphere and then went through our atmosphere very slowly.

With the ongoing mysterious sounds and booms heard all over the world could it be that the strange signal and sound is the effect of Piezoelectricity?

For example, there is geologic pressure there might also be piezoelectric effects interfering with the meteor tracker?

The word piezoelectricity means electricity resulting from pressure and latent heat and it accumulates in certain solid materials, like crystals, then it is able to generate high voltages, electronic frequencies and an ultrasonic nozzle.

Whether the strange signal and sound was a glitch, something near the antennas, the effect of piezoelectricity or it was something big in our atmosphere, for example a huge UFO that is using crystals causing similar piezoelectricity effects, will remain a mystery for the time being.

Video below:Listen to the strange incoming radar signal and sound detected in our atmosphere.