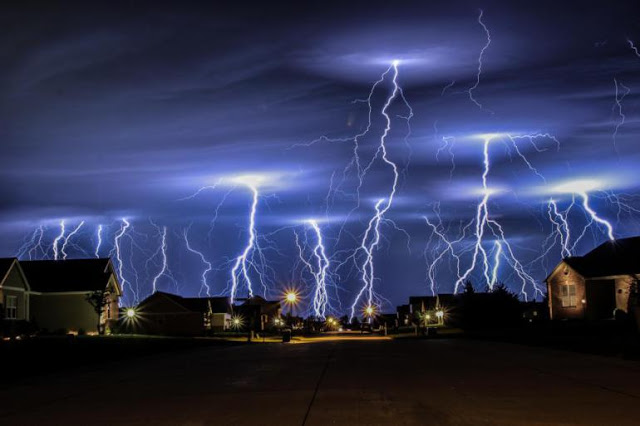 Editor’s note: This is a blog post written by mmc7 of EarthAxisHasChanged on his blog. I found it extremely interesting so I thought I would share it. I’ve only added a few minor emphasis.

As I mentioned on previous posts & comments, the lightning is becoming increasingly bizarre.

Just a couple weeks ago, we had an incident of concentrated grouped lightning as if it had been shot out of a gatling gun. Over 30 huge trees were simultaneously blasted to pieces on a half mile section of rural country road near Dallas. I saw the tight group of simultaneous bolts strike when I was a short distance away. I then drove past all these shattered trees lying all over the road. These were from separate bolts which struck all those trees at the same time. Not a multiple branched bolt. I saw the strike. A group of bolts. I’ve never seen tight grouped lightning before. All 30+ huge shattered trees lying on a half mile section of the rural country road I was headed toward. This storm produced two grouped strikes in 2 different spots within 2 minutes. The second group hit 4 miles away. A couple blocks behind the Walmart.

The 30+ trees I mentioned were large windbreak trees planted along the edges of a rural country road. It looked like the Tasmanian devil had destroyed them. The sky was clear above this spot at the leading edge of the storm. No tornadoes. I had seen the lightning strike before I reached that section of the road on my return trip home.

I had driven down that road less than an hour earlier for a quick errand. It was a small storm about 10 miles square. If I had not seen all the bolts strike there at the same time, I never would have known what happened to all the trees. There were some rattled construction contractors near the location at the time of the strike who were trying to clear the trees just minutes later. They saw the lightning from about 100 ft away. If anyone had been driving when those 30+ bolts struck, they could have been killed.

That same storm which produced those concentrated groups of clear-sky lightning bolts from the leading edge of the storm, also had this weird shuttle or rhombus shaped cloud about a square block in size (hanging under the main storm cloud) which then impacted the elevated highway. This cloud was also unnatural in appearance. It is a miracle someone didn’t have an accident looking a these oddities of lightning & cloud while driving.

We’ve had 4 unusual lightning incidents over the past 6 months. These storms also appear to be artificially supercharged. One hit took out 2 brand new power poles & sheered off the top 1/3rd of the poles & cross bars & power lines. Another hit my house. No damage. Another hit my power pole & damaged my transformer fuse housing.

Back in June 2007, I saw 2 ION storms, two days apart. I’ve mentioned this before. Ion storms are very rare. Lightning protection is one of my specialties. These are the only Ion storms I’ve ever seen. They are usually near the north pole & a result of a severe solar flare. That same week which I saw the 2 ION storms near Dallas was the same time the ISS (Int’l space station) just happened to lose ALL of its computers & backups. Coincidentally, a space shuttle had just arrived a few days earlier with a full set of replacement computers & evacuated the ISS crew until the computers were repaired & restored.

4 months later, NASA tried to blame it all on Russian technology.

The Ion storms tell us it was a huge solar flare. The fact that the shuttle arrived ahead of time with a full set of replacement computer packs before the ISS computers failed tells us NASA knew about the flare in advance. The fact that NASA tried to blame it on the Russians 4 months later tells us NASA didn’t have the decency to let the Russians know about the Solar flare they detected with their SOHO satellites. NASA didn’t tell anyone else either which could have destroyed many other satellites & global electronic systems.

NASA has also been backfilling job openings with former CIA, blackops & military. NASA stated this on an announcement several years ago. So they are no longer the public space agency. It is all about cover up of anything they find. The CIA has already been doing this at MSSS, JPL, Northrop Grumman & other aerospace contractors. The CIA is also sabotaging the efforts of the commercial space corporations to impede their efforts. They also have infiltrated the ranks at MSSS to censor the imagery before NASA ever sees it. I have relatives & friends who worked for several intelligence agencies and DOD. So I know what they are doing.

I contacted NWS/NOAA; NASA & meteorological universities at the time, to obtain images of the Ion storms. I called them lightning storms to keep it simple. Every one of them told me that All lightning data & imagery are classified. I could not believe my ears. The only reason to classify lightning would be if they have weaponized it. After seeing the gatling gun lightning here a couple weeks ago, it would certainly qualify as weaponized & unnatural. There certainly was nothing in any of these strike locations which would have caused or instigated such lightning behavior. I’m a national expert on lightning protection (among other things). So I don’t speculate on these issues lightly.

All I wanted on the Ion storms was video so I could share it with you. Now we have been getting clear sky leading edge storm lightning bolts like fired weapons near Dallas. Near me, for that matter. I’m not so sure this is random. I can say for certain this was not natural. Since my house was hit, I had everything upgraded to protect it from these strikes.

I did see a row of about 50 bolts hit the edge of the everglades at the same time near the airport in Broward County, FL about 13 years ago. But these were well spaced bolts hitting a swamp. The water table in Ft Lauderdale was only a foot below the soil when you dig a hole. It is brackish water. A mix of salt & fresh water. Makes a great battery.

There was a company in South San Francisco in the 80’s who unintentionally turned their soil into a battery with sand & seawater & acid. It take special skills & knowledge to create a ground bed under such conditions.

The difference between an Ion storm & lightning storm is the sound & discharge. An Ion storm flashes & flickers rapidly like a strobe light. There is no thunder. Instead, you hear loud electrical arching, buzzing & clicking. Like the sound & flashing of a downed electrical cable or an electrical panel shorting out. Imagine giant rapidly flickering, flashing strobe lights in the clouds with only the loud sound of arching, buzzing & clicking. No thunder. No bolts. No crashes. Like being in a scary carnival attraction.

So if anyone sees any strange lightning or storms or the aurora borealis south of Canada, let us know. We need to track these and other unusual phenomena.

I believe it was 1998 when a solar storm sheared the top of earths magnetic field & atmosphere creating a hole spewing a fountain of atmosphere & Ions into space. I wonder if that also thins our oxygen levels as well? Not to mention depleting our protection from solar flares & cosmic radiation & UV.

It occurs to me that a super severe solar flare could strip away earths entire atmosphere, destroying all life on our planet. Not to say it will ever do this, but the potential is there. Especially since it already sheared off the top of the atmosphere in 1998. I noticed how NASA lost all interest in the subject after they spent all their project grant money after launching Caper. They didn’t even bother to evaluate the data they gathered. I tried to find it. They left the entire project in limbo, unfinished.