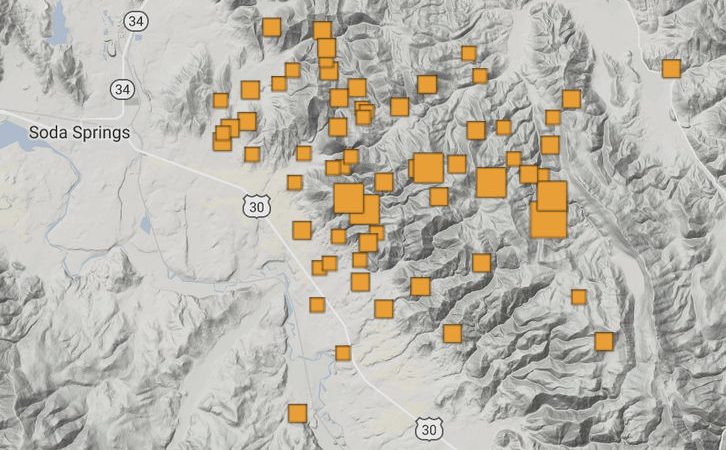 The strongest earthquake to hit the region in years as well as 61 smaller quakes occurred Saturday night to Sunday night in Southeast Idaho, startling tens of thousands of residents.

Authorities said it does not appear that the quakes have caused any injuries to people or damage to structures (ADVICE ON WHAT TO DO IF AN EARTHQUAKE HITS YOUR TOWN IS AT THE END OF THIS ARTICLE).

The quakes were felt in Caribou County, where all 62 occurred, as well as in cities in northern Utah and throughout Southeast Idaho. It’s unknown when the earthquake swarm will end. Earthquake swarms have been known to continue for weeks or even months.

In recent decades Southeast Idaho has seen infrequent instances in which one to three weak earthquakes occur near the Western Wyoming border. Local authorities say they cannot ever remember any earthquake swarm in Southeast Idaho that comes even close to the current series of temblors shaking the region.

Five of the quakes occurred early Sunday evening – the last being at 6:36 p.m. They were preceded by five quakes on Sunday afternoon, 19 on Sunday morning and 33 on Saturday night. All 62 of the quakes were reported by University of Utah Seismograph Stations.

Bannock County Sheriff Lorin Nielsen said he’s been a law enforcement officer in Southeast Idaho for over 40 years and during that time there’s never previously been so many earthquakes occurring in such a short time frame. He said at the most there have been up to three earthquakes that have occurred in short succession along the East Idaho-Western Wyoming border. The dozens of earthquakes that occurred from Saturday night through early Sunday evening are unprecedented, the sheriff said.

“I’ve never seen anything like this,” Nielsen said. “My wife asked if we should leave the house.”

The earthquakes occurred starting shortly before 6 p.m. Saturday. The second quake to strike was at 5:56 p.m. Saturday and it was the most powerful thus far. The quake was about 10 miles east of Soda Springs and registered at 5.3 on the Richter scale – strong enough to possibly damage buildings. It’s been years since Southeast Idaho has experienced a quake of over 5.0 on the Richter scale.

The quakes have been felt as far away as Logan and Ogden in northern Utah and Basalt, Arimo, Pocatello, Chubbuck, American Falls, Fort Hall, Aberdeen, Blackfoot and Springfield in Southeast Idaho.

Below is advice from the U.S. Department of Homeland Security via https://www.ready.gov/earthquakes on what to do if an earthquake hits your community:

If you are inside a building: