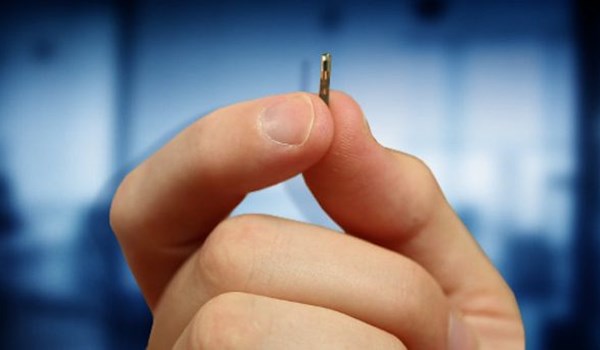 While they do say it is an option now, next thing you know it will be mandatory and enforceable by penalties and fines. I surely hope the latter turns out to not be the case.

At first blush, it sounds like the talk of a conspiracy theorist: a company implanting microchips under employees’ skin. But it’s not a conspiracy, and employees are lining up for the opportunity.

On Aug. 1, employees at Three Square Market, a technology company in Wisconsin, can choose to have a chip the size of a grain of rice injected between their thumb and index finger. Once that is done, any task involving RFID technology — swiping into the office building, paying for food in the cafeteria — can be accomplished with a wave of the hand.

The program is not mandatory, but as of Monday, more than 50 out of 80 employees at Three Square’s headquarters in River Falls, Wis., had volunteered.

“It was pretty much 100 percent yes right from the get-go for me,” said Sam Bengtson, a software engineer. “In the next five to 10 years, this is going to be something that isn’t scoffed at so much, or is more normal. So I like to jump on the bandwagon with these kind of things early, just to say that I have it.”

Jon Krusell, another software engineer, and Melissa Timmins, the company’s sales director, were more hesitant. Mr. Krusell, who said he was excited about the technology but leery of an implanted device, might get a ring with a chip instead.

“Because it’s new, I don’t know enough about it yet,” Ms. Timmins said. “I’m a little nervous about implanting something into my body.”

Still, “I think it’s pretty exciting to be part of something new like this,” she said. “I know down the road, it’s going to be the next big thing, and we’re on the cutting edge of it.”

The program — a partnership between Three Square Market and the Swedish company Biohax International — is believed to be the first of its kind in the United States, but it has already been done at a Swedish company, Epicenter. It raises a variety of questions, both privacy- and health-related.

“Companies often claim that these chips are secure and encrypted,” said Alessandro Acquisti, a professor of information technology and public policy at Carnegie Mellon University’s Heinz College. But “encrypted” is “a pretty vague term,” he said, “which could include anything from a truly secure product to something that is easily hackable.”

Another potential problem, Dr. Acquisti said, is that technology designed for one purpose may later be used for another. A microchip implanted today to allow for easy building access and payments could, in theory, be used later in more invasive ways: to track the length of employees’ bathroom or lunch breaks, for instance, without their consent or even their knowledge.

“Once they are implanted, it’s very hard to predict or stop a future widening of their usage,” Dr. Acquisti said.

Todd Westby, the chief executive of Three Square, emphasized that the chip’s capabilities were limited. “All it is is an RFID chip reader,” he said. “It’s not a GPS tracking device. It’s a passive device and can only give data when data’s requested.”

“Nobody can track you with it,” Mr. Westby added. “Your cellphone does 100 times more reporting of data than does an RFID chip.”

Health concerns are more difficult to assess. Implantable radio-frequency transponder systems, the technical name for the chips, were approved by the Food and Drug Administration in 2004 for medical uses. But in rare cases, according to the F.D.A., the implantation site may become infected, or the chip may migrate elsewhere in the body.

Dewey Wahlin, general manager of Three Square, emphasized that the chips are F.D.A.-approved and removable. “I’m going to have it implanted in me, and I don’t see any concerns,” he said.

While that sentiment is not universal at Three Square, the response among employees was mostly positive.

“Much to my surprise, when we had our initial meeting to ask if this was something we wanted to look at doing, it was an overwhelming majority of people that said yes,” Mr. Westby said, noting that he had expected more reluctance. “It exceeded my expectations. Friends, they want to be chipped. My whole family is being chipped — my two sons, my wife and myself.”

If the devices are going to be introduced anywhere, Mr. Wahlin noted, employees like Three Square’s might be most receptive.

“We are a technology company, when all is said and done, and they’re excited about it,” he said. “They see this as the future.”