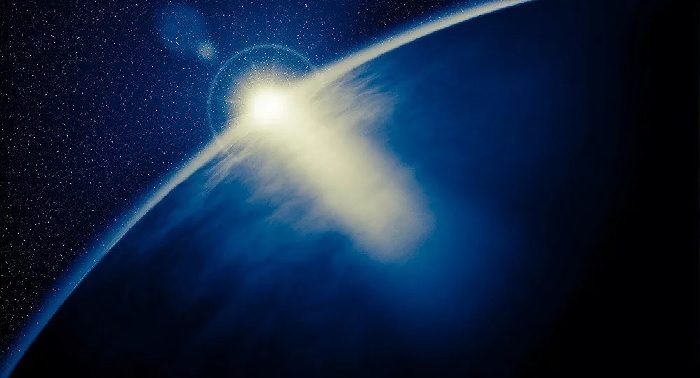 “Although the innovations sound like science fiction, they seemed to describe the theoretical underpinnings of a real, presumably existing craft with UFO-like performance.”

by Lilia Dergacheva
via Sputniknews

The earlier reported patents attributed to some craft with purported UFO-like features include such breakthrough technologies as a plasma fusion device and generator of high-frequency gravitational waves.

Several unusual patents assigned to the US Navy were published last year, raising eyebrows over the seemingly unconventional claims found within them.

These patents included puzzling technologies such as a “high temperature superconductor”, a “high-frequency gravitational wave generator”, a force field-like “electromagnetic field generator”, and a “plasma compression fusion device”, just to name a few.

Although the innovations sound like science fiction, they seemed to describe the theoretical underpinnings of a real, presumably existing craft with UFO-like performance.

As follows from new documents seen by the Drive, apart from design, procurement, manufacture, testing, and compiling of final reports over 1,600 hours of work were conducted in 2018 and 2019 on the project.

Fresh Freedom of Information Act releases provide in-depth insights not just into how seriously the Navy could have taken Dr Pais’ work, but also exactly how elements of it were tested at the cost of hundreds of thousands of dollars and where the programme may have led the scientists to.

The documents even mention a Spacetime Modification Weapon, or SMW for short – a weapon that “can make the Hydrogen bomb seem more like a firecracker in comparison”, the Drive states.

The releases, which are all related to a programme called Naval Innovative Science and Engineering – Basic & Applied Research tied to a project named “The High Energy Electromagnetic Field Generator (HEEMFG)”, contain hundreds of pages of elaborate technical drawings, photographs, and data related to the HEEMFG tests.

The system was reportedly meant to evaluate the feasibility of Dr Salvatore Pais’ conclusions called the “Pais Effect”.

The latter is a theoretical physics concept thought to be enabled through the “controlled motion of electrically charged matter (from solid to plasma) via accelerated spin and/or accelerated vibration under rapid (yet smooth) acceleration-deceleration-acceleration transients”.

This effect, Dr Pais claims, may prompt the creation of incredibly powerful electromagnetic energy fields that can “engineer the fabric of our reality at the most fundamental level”, leading to genuine revolutions in power and propulsion, energy, and even weapons production.

National Security Importance
Among the experiment’s conclusions detailed in the new releases is an August 2019 NAVAIR Science & Technology Alignment and Investment Reporting System (STAIRS) report suggesting that “the spin test to evaluate the HEEMFG effect took place in late September 2018”.

It is claimed that while the tests “did not measure any anomalous electromagnetic effects that would satisfy the theory”, investigators assume that “the reason for this is that the capacitor confined the electrons to its centre, rather than the surface, which is necessary for generation of the effect”.

The internal documents indicate that the Navy believes this technology has national security importance due to it potentially leading to the production of thermonuclear fusion ignition energy with the commercial as well as military potential “to ensure national energy dominance”.

As for the cost of the tests, it appears that at least $466,810 was splashed out on the project between 2017 and 2019, which is far more than what was previously thought, the Drive noted.

The internal documents were leaked months after the Pentagon confirmed the authenticity of a Tic-Tac-shaped craft sighting said to have taken place on 10 November 2004. Thirteen years later, a radar video of the incident was leaked and made available to the public, triggering widespread media coverage and investigation, resulting in the Pentagon officially releasing the trace videos.