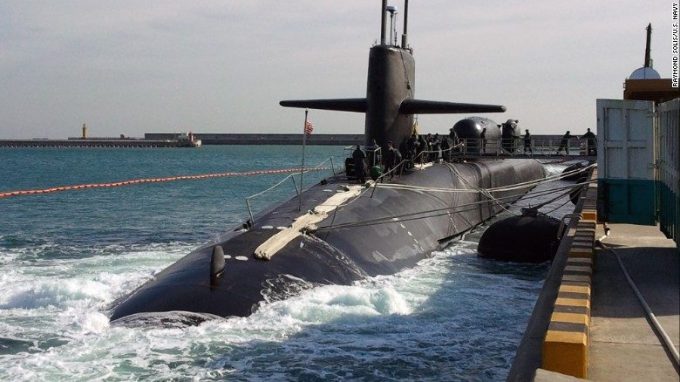 A US nuclear submarine armed with guided missiles has made a port call in South Korea, while Pyongyang is reportedly holding massive long-range artillery drills amid muscle-flexing in the region and rising tensions between Washington and North Korea.

The USS Michigan nuclear submarine arrived in South Korea on Tuesday “during a regularly scheduled deployment to the Western Pacific,” according to a statement issued by the US Pacific Fleet.

The submarine is one of the four Ohio-class nuclear vessels, one of the largest in the world “measuring more than 560 feet long and weighing more than 18,000 tons when submerged.”

The US military praises the sub as a weapon to “provide the Navy with unprecedented strike and special operation mission capabilities.”

The move comes at a tense time in relations between Washington and Seoul on one side and North Korea on the other.

On Tuesday, Pyongyang celebrates the 85th anniversary of the foundation of its Korean People’s Army. The jubilee was marked by massive – yet conventional – drills, which featured some 300-400 long-range artillery pieces and were supervised by North Korean leader Kin Jong-un, according to Yonhap News agency citing South Korean Army sources.

In a fresh stage of escalation between the US and North Korea, President Donald Trump early in April promised to send a “very powerful armada,” led by the aircraft carrier ‘USS Carl Vinson,’ to press Pyongyang into abandoning its nuclear and missile programs.

Despite the threats, North Korea went on to test new ballistic missiles, although the launch failed.

The “armada” should arrive in the waters surrounding the peninsula “within days,” US Vice President Mike Pence said on Saturday, without giving specific details.

Pyongyang has repeatedly urged Washington stop its “military hysteria” and come to its “senses” – or face a “merciless response.”

North Korea called the deployment of the ‘Carl Vinson’ carrier group “an extremely dangerous act by those who plan a nuclear war to invade,” and even vowed to sink the carrier with a “single strike.”

Kim In Ryong, North Korean ambassador to the UN, accused the US of using “gangster-like logic” and being “hell-bent on dangerous saber-rattling in South Korea,” while speaking at a press conference in New York last week.

“The United States [is] introducing in South Korea, on the Korean Peninsula, the world’s biggest hotspot, huge nuclear strategic assets, seriously threatening the peace and security of the peninsula and pushing it to the brink of war,” Kim told reporters.

While Pence last week announced an “end of strategic patience” from the US towards North Korea, stating that “all options are on the table,” US envoy to the UN Nikki Haley said Monday that they were not “trying to pick a fight with him [Kim Jong-un].”

“We are not going to do anything unless he gives us reason to do something,” she said.

“But right now, we’re saying, ‘don’t test, don’t use nuclear missiles, don’t try and do any more actions,’ and I think he’s understanding that,” Haley added.

“And China’s helping really put that pressure on him.”

Pyongyang was alarmed by the US deployment of the THAAD anti-missile system in South Korea earlier this year, warning that such actions might lead to further escalation and ultimately to a nuclear war.