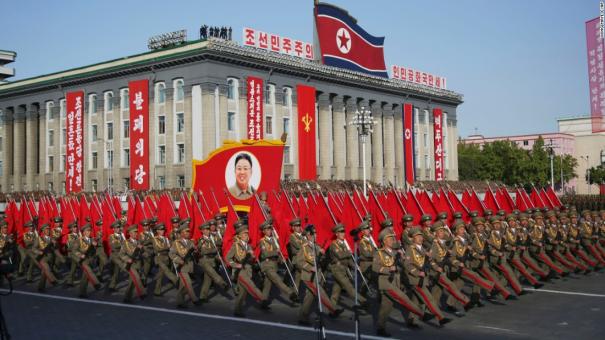 The Pentagon has refused to confirm or deny the speculation.

NBC news has reported that a US strike on North Korea may be imminent. According to the report,

“The U.S. is prepared to launch a preemptive strike with conventional weapons against North Korea should officials become convinced that North Korea is about to follow through with a nuclear weapons test, multiple senior U.S. intelligence officials told NBC News”.

This follows speculation that North Korea may test a nuclear weapon to celebrate the ‘Day of The Son’, the 105th birthday North Korean founder Kim Il-Sung, who was Supreme Leader between 1948 and his death in 1994. The event will occur on the 15th of April.

The Pentagon refused to confirm nor deny the report saying,

“Commanders are always considering a full range of options to protect against any contingencies”.

“Our commitment to the defence of our allies, including the Republic of Korea and Japan, in the face of potential threats, remains steadfast…”

North Korea has responded to possible US threats by saying,

“This goes  to prove that the US reckless moves for invading the DPRK (Democratic Peoples Republic of Korea/North Korea) have reached a serious phase. If the US dares opt for a military action, crying out for ‘preemptive attack’ and ‘removal of the headquarters’ the DPRK is ready to react to any mode of war desired by the US”.

The statement further said that,

” (The US would be) wholly accountable for the catastrophic consequences”.

North Korea has a large arsenal of weapons of mass destruction which includes nuclear weapons. If the US conducts an unprovoked attack, North Korea may deliver on consistent promises to retaliate, implementing measures up to and including total war.

In spite of historic tensions between Washington and Pyongyang, no military action has been conducted between the two countries since the ceasefire which indefinitely paused the Korean War in 1953.

With reports of US ships within striking range of North Korean targets, the world is now one step closer to nuclear war.