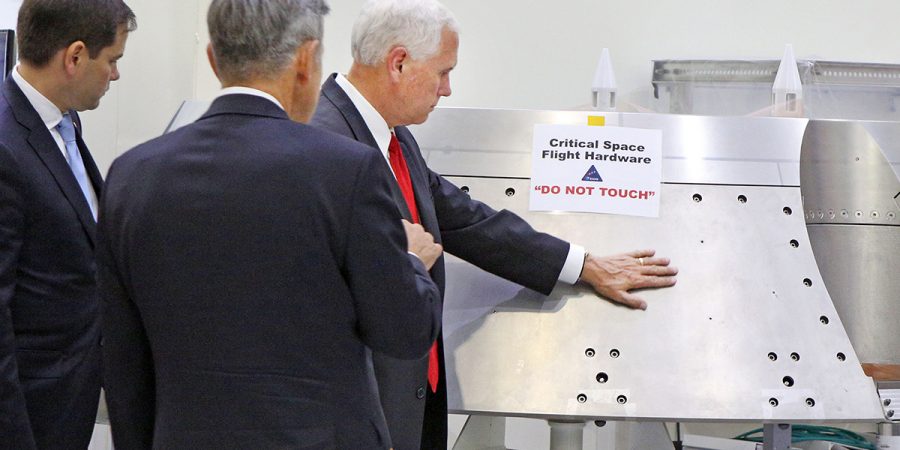 During a visit to the Kennedy Space Center in Cape Canaveral, Florida, US Vice President Mike Pence caused a stir online when a photo was posted showing him touching an Orion spacecraft part clearly labeled with a sign reading “DO NOT TOUCH.”

Mike Pence @VP gets a tour of the NASA Orion clean room & touches critical space flight hardware even though the sign says not to. 😂🇺🇸 pic.twitter.com/Wk2HWdNbp0

In Pence's defense, "DO NOT TOUCH" is in quotes. pic.twitter.com/E6AXhxICnn

The titanium forward bay cover was in a clean room, in which equipment is being assembled for a capsule to take humans to deep space.

After the photo went viral, Pence apologized to NASA in a tweet, saying he touched the equipment on a dare from Florida Senator Marco Rubio.

The faux-pas doesn’t seem to have ruffled feathers at NASA. Spokesperson Jen Rae Wang released a statement saying, “The signs are there as a day-to-day reminder, including the one visible on the titanium Forward Bay Cover for the Orion spacecraft. Procedures require the hardware to be cleaned before tiles are bonded to the spacecraft, so touching the surface is absolutely okay.”

Pence was visiting NASA to deliver a speech to NASA employees on the future of the US’s space program, saying that the White House plans to “usher in a new era” of American space leadership.

Pence joked about his handsy blunder, saying it’s not the first time he’s touched something he shouldn’t have:

Okay…so this isn't exactly the first time this has happened. pic.twitter.com/6Y7b3UlJXe