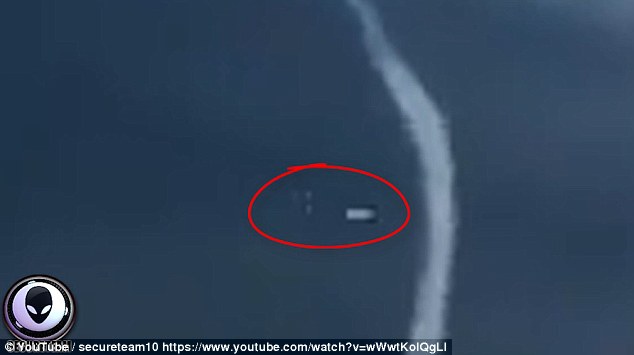 Video of UFO off the Coast of Algeria Near a Waterspout

A mysterious new video has emerged which conspiracy theorists believe may show a UFO off the coast of Algeria.

A strange object can be seen flying through the sky, while a waterspout can be seen shooting out of the water and into the air.

It is unclear what the object is, but the uploader of the video believes that it is a UFO.
The clip was recorded on a mobile phone, and was posted on Ohio-based YouTube channel, Secureteam10, who regularly post supposed UFO sightings.

In the video, Tyler Glockner from SecureTeam explains: ‘Some of the witnesses that saw this thing, say what to them looked like a UFO had flown up into the clouds, shortly after which we see this waterspout like formation, or what amounts to water being sucked up put of the Mediterranean ocean off the coast of Algeria.’

*NOTE: the object doesn’t appear till around the 53 second mark of the video

The waterspout seen in the video is a phenomenon that appears fairly regularly in nature.

Tornadic waterspouts are tornadoes that form over water or move from land to water.

They have the same characteristics as a land tornado and are associated with severe thunderstorms, high winds, large hail and dangerous lightning.

But the waterspout itself is not what has peaked the UFO hunters’ interests.

Mr Glockner says that the phenomena is different from normal waterspouts due to the presence of something unusual in the clouds.

In the comments of the video, not everyone seems convinced of the UFO theory. 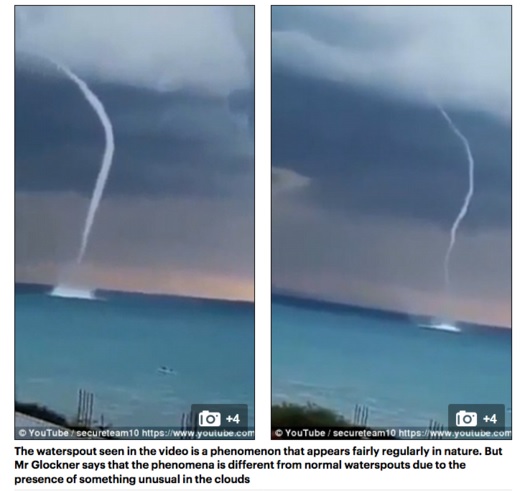 Swagga Swurf said: ‘Guess I’m the only one that sees the UFO’s wings flapping?’, hinting that the object may be a bird.

And Tony Alexander added: ‘It is just a water spout with a caspian tern flying across the sky.

‘The three dots are probably just water falling from the sky.’