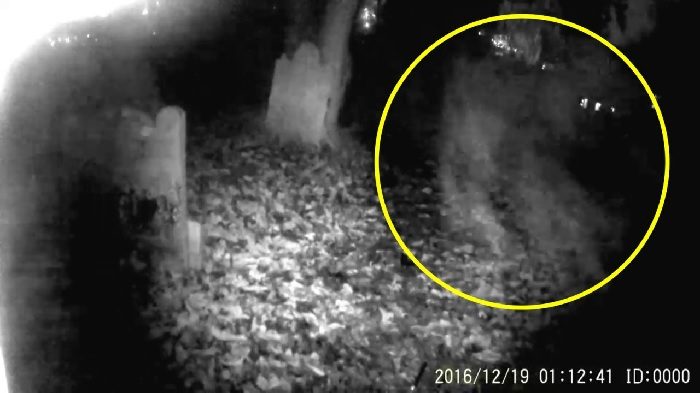 A personal trainer claims to have captured the spine-tingling moment a ghost flew straight at his camera as he explored an eerie 800-year-old graveyard.

In the spooky video, a smoky white figure can be seen launching itself directly at Tony Ferguson’s camera as he investigated the cemetery at St Mary’s Church in Hampshire, in the UK.

Tony, who doubles as a paranormal investigator, claims he decided to scout out the cemetery after reports of a ‘negative presence’ from people visiting their loved ones’ graves.

“I don’t usually investigate cemeteries. I don’t believe that just because people are buried there, they must be haunted,” Tony said.

“But a few people got in touch to tell me they were concerned about their loved ones who are buried there.

“Every time they went they could feel this negative presence and it was making them very uncomfortable.”

The 33-year-old claims the moment he stepped foot in the graveyard he felt ‘unwanted’ and then suddenly heard a ‘whooshing’ sound which he now believes must have been the ghost whizzing past him.

While seeing visual evidence of what he felt and heard was ‘really weird’ for Tony at first, he says it is reassuring to know his mind was not just playing tricks on him.

After watching the footage in slow-motion, Tony believes the spirit to be a ‘controlling’ gentleman trying to discourage people from visiting the cemetery.

“He is clearly a very controlling spirit and doesn’t want people visiting the graveyard,” Tony said.

Tony got into ghost hunting just over a year ago after developing a fascination with the paranormal as a child.

Throughout his childhood Tony had a number of ghostly encounters with the spirits of a man and young girl in his granddad’s house.

After his paranormal experiences only became more frequent as an adult, Tony became convinced that something about his ‘energy’ attracts spooks.