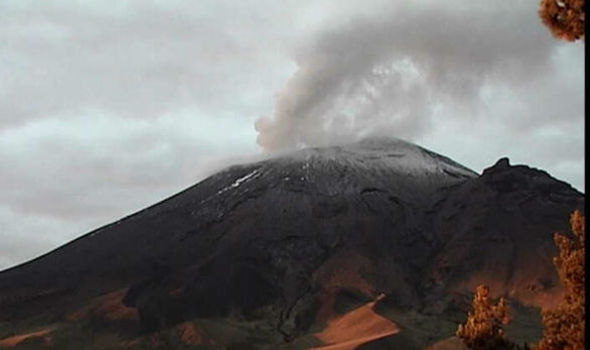 MEXICO’S biggest and most feared volcano, Popocatépetl, has AGAIN roared into life with a major eruption of TOXIC smoke and ash caused by an earthquake – with fears it could lead to the ‘BIG ONE’.

The increased seismic activity this weekend could mean it is bubbling up for a devastating “big one” eruption – the likes of which have not been seen since 2000 when 41,000 people had to evacuate.

The latest flurry of eruptions happened over 24 hours on Saturday and Sunday, coinciding with a magnitude 1.8 earthquake.

They followed a series of four other eruptions last Monday that were also triggered by two smaller earthquakes over a spate of 24 hours.

New footage shows Popocatépetl erupting on Sunday showing steam and gas exploding up into the air.

Footage of last Monday’s eruption of El Popo, as it is known locally, showed tons of ash thrown into the sky prompting a warning from Mexico’s National Center for Disaster Prevention (CENAPRED).

Residents have been warned to steer clear of the volcano.

Popocatépetl volcano is just 35 miles from Mexico City and only 20 miles from nearby city Puebla, meaning about 26million people would be affected by a disaster-scale eruption.

CENAPRED said in a statement after the latest eruption: “The CENAPRED urges you not to approach the volcano, specifically the crater, due to the danger of falling ballistic fragments.”

El Popo is believed to have erupted last week after two small volcano tectonic earthquakes were triggered, measuring 1.2 and 1.6 on the Richter scale.

This weekend’s followed a slightly stronger 1.8 magnitude quake, and it is feared these could be increasing, triggering more powerful eruptions.

The National Centre for Disaster Prevention said steam from the latest eruption this weekend spread towards the west.

Thousands of people living by Popocatépetl have been on evacuation alert since January after the monster peak began spewing toxic gas and ash.

At the time, it sent a mile-high plume of ash into the air, putting thousands of people living within 10 miles of it on a yellow alert to be ready to evacuate should activity increase.

Popocatépetl, which is a 5,426-metre glacier peak, has erupted more than 20 times since 1519, according to records.

In 2005 it had a minor eruption, but activity has been increasing since 2012.

There was also a large eruption back in April.

Ash was propelled a staggering three kilometres into the sky when it first started erupting on Monday, April 18.

Such was the sheer volume of ash ejected from El Popo that it showered down on the nearest town of Puebla, causing the airport to shut down.