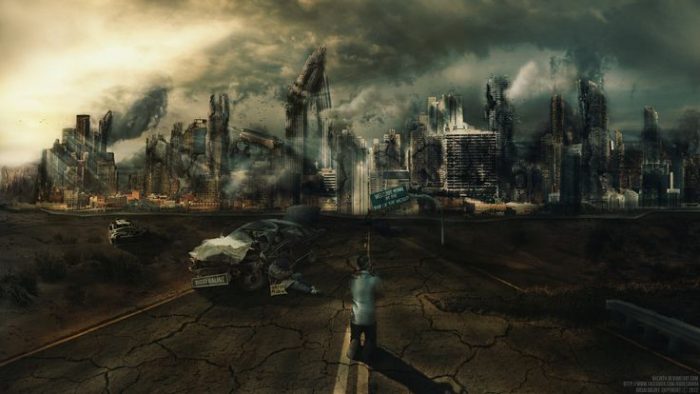 Apocalypse, extinction, doomsday, all different words with the same potential outcome.. the end of life. If faced with such a scenario and given enough time could we perhaps devise a plan to overcome the daunting situation.

Evacuate Earth is a National Geographic Channel documentary that portrays the hypothetical scenario of humans evacuating the planet Earth before it is destroyed by a rogue neutron star. It details the technical and social complications of building a generation ship to save humanity and other Earth organisms by relocating to a planet in another solar system.

The documentary proposes a thought experiment in which a neutron star approaches Earth. Constant meteor storms are the first warning sign, and dramatic sequences depict widespread destruction and the deaths of thousands of people. Given seventy-five years to prepare, human society radically shifts toward the evacuation of Earth. The propulsion system for the spacecraft is the first problem to be addressed. In a dramatic sequence, the world’s leading experts debate the benefits and drawbacks of various methods. Conventional rockets are too slow, and antimatter engines are too unstable; they eventually settle on nuclear pulse propulsion, as originally suggested by Project Orion. The world’s engineers, scientists, and manufacturing workers begun work at a new site dubbed Starship City. Interviewed experts propose that fatalism may drive some people to attempt to sabotage production, and, in a dramatic sequence, terrorists strike the city, though they are destroyed by a hidden minefield.

Who is to be evacuated is another major issue. Although diversity is respected, any selected individual would have to be genetically hardy and not predisposed toward disease. In dramatic sequences, a second ark ship is announced amid controversy, as it is reserved for the world’s wealthiest and most powerful families. Simulated newscasts announce delays and setbacks as scientists are lured to the private ark ship. As the neutron star enters our solar system, Saturn is destroyed, and the Earth experiences calamitous shifts in its seasons. The private ark ship, equipped with an antimatter engine, explodes when its antimatter containment fails. Families are potentially broken up as they prepare to board the remaining ark ship, and experts discuss the basic necessities for human life: bacteria, air, water, and food. Bacteria are easily stored, and air is synthesized from water. Food, however, remains a difficult problem, and experts propose that colonists will eat insects and algae, which are easily replenished and space efficient.

Once the ark ship launches, the neutron star radiation begins to heat up the core and melt the crust, which causes massive earthquakes and volcanism. Next, the gravity from the neutron star tears away the surface, causing the crust to shatter and the hot interior of earth to spill out into the vacuum of space. Earth is destroyed, but only the colonists can see this happen, as the rest of humanity had already been wiped out. The colonists continue their journey to Barnard’s Star; experts discuss the potential for mutiny and fatalism, ultimately rejecting them as unlikely, as strong family and societal bonds will be emphasized. The journey is estimated to take approximately eighty-eight years, and the youngest of the original crew survive to see the new planet, which potentially harbors other lifeforms. Experts conclude that the scenario, though unlikely, is possible and requires preparation from the world’s governments.

The end of the world doesn’t have to mean the end of mankind. CGI and interviews with experts explore how we could leave the Earth.

In a doomsday scenario, the race is on to escape annihilation.

If we had 75 years warning, would humankind be capable of evacuating the planet?

This programme examines how you could flee your home habitat: from building a 25km-long spaceship capable of travelling trillions of kilometres to deciding which unlucky souls get left behind.