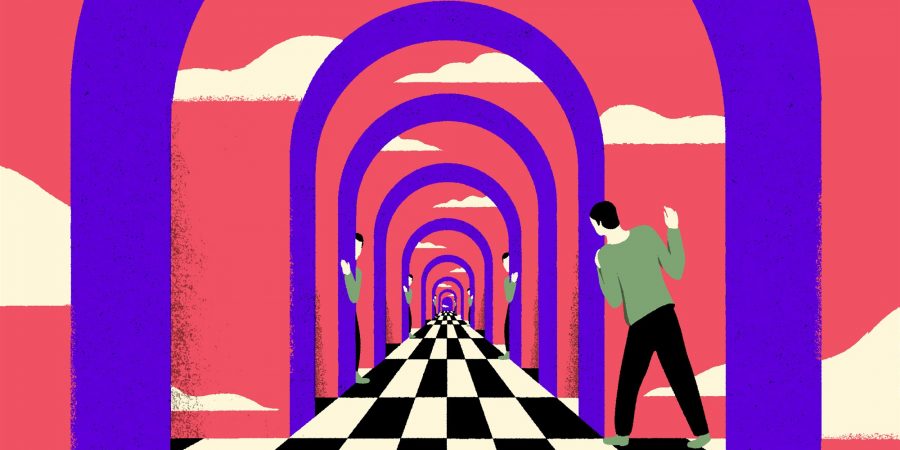 Weirdest Quantum Physics Idea Catching On: Endless Worlds with Countless Versions of You

Ever wonder what would have happened if you’d taken up the “Hey, let’s get coffee” offer from that cool classmate you once had? If you believe some of today’s top physicists, such questions are more than idle what-ifs. Maybe a version of you in another world did go on that date, and is now celebrating your 10th wedding anniversary.

The idea that there are multiple versions of you, existing across worlds too numerous to count, is a long way from our intuitive experience. It sure looks and feels like each of us is just one person living just one life, waking up every day in the same, one-and-only world.

But according to an increasingly popular analysis of quantum mechanics known as the “many worlds interpretation,” every fundamental event that has multiple possible outcomes — whether it’s a particle of light hitting Mars or a molecule in the flame bouncing off your teapot — splits the world into alternate realities.

Multiple splits, multiple worlds
Even to seasoned scientists, it’s odd to think that the universe splits apart depending on whether a molecule bounces this way or that way. It’s odder still to realize that a similar splitting could occur for every interaction taking place in the quantum world.

Things get downright bizarre when you realize that all those subatomic splits would also apply to bigger things, including ourselves. Maybe there’s a world in which a version of you split off and bought a winning lottery ticket. Or maybe in another, you tripped at the top of a cliff and fell to your death — oops.

“It’s absolutely possible that there are multiple worlds where you made different decisions. We’re just obeying the laws of physics,” says Sean Carroll, a theoretical physicist at the California Institute of Technology and the author of a new book on many worlds titled “Something Deeply Hidden.” Just how many versions of you might there be? “We don’t know whether the number of worlds is finite or infinite, but it’s certainly a very large number,” Carroll says. “There’s no way it’s, like, five.”

Carroll himself is comfortable with the idea that he’s but one of many Sean Carrolls running around in alternate versions of reality. “The concept of a single person extending from birth to death was always just a useful approximation,” he writes in his new book, and to him the many worlds interpretation merely extends that idea: “The world duplicates, and everything within the world goes along with it.”

How did we get here?
The mind-bending saga of the many worlds interpretation began in 1926, when Austrian physicist Erwin Schrödinger mathematically demonstrated that the subatomic world is fundamentally blurry.

In the familiar, human-scale reality, an object exists in one well-defined place: Place your phone on your bedside table, and that’s the only spot it can be, whether or not you’re looking for it. But in the quantum realm, objects exist in a smudge of probability, snapping into focus only when observed.

“Before you look at an object, whether it’s an electron, or an atom or whatever, it’s not in any definite location,” Carroll says. “It might be more likely that you observe it in one place or another, but it’s not actually located at any particular place.”

Nearly a century of experimentation has confirmed that, strange as it seems, this phenomenon is a core aspect of the physical world. Even Einstein struggled with the notion: What happened to all of the other possible locations where the object could have been, and all the other different outcomes that could have ensued? Why should an object’s behavior depend on whether or not somebody was looking at it?

In 1957, a Princeton student named Hugh Everett III came up with a radical explanation. He proposed that all possible outcomes really do occur — but that only a single version plays out in the world we inhabit. All the other possibilities split off from us, each giving rise to its own separate world. Nothing ever goes to waste, in this view, since everything that can happen does happen in some world.

For decades, Everett’s colleagues mostly brushed aside his explanation, treating it more like a ghost story than serious science. But nobody has found any flaws in Schrödinger’s equation; nor can they explain away its implications. As a result, many contemporary physicists — including David Deutsch at Oxford University and Max Tegmark at the Massachusetts Institute of Technology — have come to agree with Carroll that the many worlds interpretation is the only coherent way to understand quantum mechanics.

If new universes are constantly popping into existence, isn’t something being created from nothing, violating one of the most basic principles of physics? Not so, according to Carroll: “It only looks like you are creating extra copies of the universe. It’s better to think of it as taking a big thick universe and slicing it.”

Why do we experience one particular reality but none of the others? “What other one would you find yourself in?” Carroll says, amused. “It’s like asking why you live now instead of some other time. Everyone in every world thinks that they’re in that world.”

Carroll also has a disappointing response for one of the most compelling questions of all: Could you cross over and visit one of the other realities and compare notes with an alternate-world version of yourself? “Once the other worlds come into existence, they go their own way,” Carroll says. “They don’t interact, they don’t influence each other in any form. Crossing over is like traveling faster than the speed of light. It’s not something that you can do.”

War of the many worlds
One criticism of the many worlds interpretation is that while it offers a colorful way to think about the world, it doesn’t deliver any new insights into how nature works. “It is completely content-less,” says physicist Christopher Fuchs of the University of Massachusetts, Boston.

Fuchs favors an alternative called Quantum Bayesianism, which offers a path back to an old-fashioned single reality. He argues that the universe changes when you look at it not because you are creating new worlds but simply because observation requires interacting with your surroundings. No coffee dates, no other lives for you. “In this way, measurement is demoted from being something mystical to being about things as mundane as walking across a busy street: It’s an action I can take that clearly has consequences for me,” he says.

Coming at the critique from a different angle, Oxford’s Roger Penrose argues that the whole idea of many worlds is flawed, because it’s based on an overly simplistic version of quantum mechanics that doesn’t account for gravity. “The rules must change when gravity is involved,” he says.

In a more complete quantum theory, Penrose argues, gravity helps anchor reality and blurry events will have only one allowable outcome. He points to a potentially decisive experiment now being carried out at the University of California, Santa Barbara, and Leiden University in the Netherlands that’s designed to directly observe how an object transforms from many possible locations to a single, fixed reality.

Carroll is unmoved by these alternative explanations, which he considers overly complicated and unsupported by data. The notion of multiple yous can be unnerving, he concedes. But to him the underlying concept of many worlds is “crisp, clear, beautiful, simple and pure.”

If he’s right, he’s not the only Sean Carroll who feels that way.